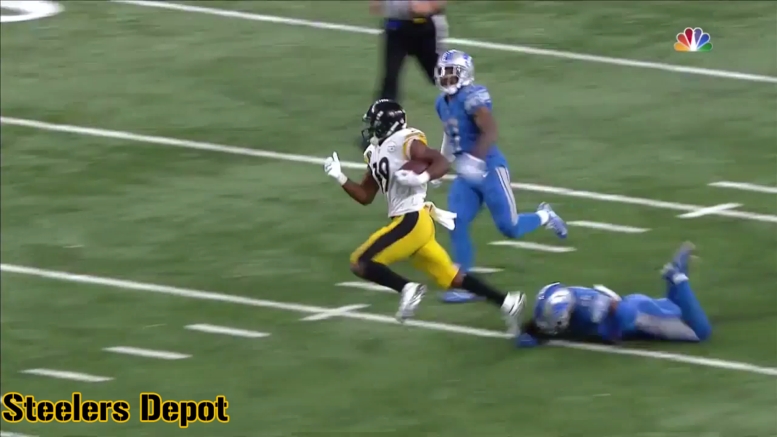 The NFL announced the five finalists for the 2017 Pepsi NFL Rookie of the Year award on Friday and Pittsburgh Steelers wide receiver JuJu Smith-Schuster wasn’t included. Since then, I have received a few angry emails from fans of the Steelers stating that his omission is a huge oversight. Let’s have a look.

For starters, keep in mind that the annual NFL Rookie of the Year award finalists list only includes five players and generally that list is heavily dominated by offensive players. That was definitely the case this year as four running backs Alvin Kamara, Christian McCaffrey, Kareem Hunt and Leonard Fournette all made the finalists list along with cornerback Marshon Lattimore.

Now, let’s look at the all-purposes yards stats of the top offensive skill position rookies from this past season sans the quarterbacks:

As you can see by the stats above, Kamara, Hunt and Fournette all belong on the finalists list this year and while we are only focusing on offensive rookies in this post, I believe that the lone defensive player, Lattimore, belongs as well. That leaves one spot up for debate. With apologies to running back Tarik Cohen, over 50% of his all-purpose yards came via returns and thus it’s hard to make a strong argument for him to be a finalists.

In short, the battle for the fifth and final finalists spot should probably be between McCaffrey and Smith-Schuster.

Of McCaffrey’s 117 rushing attempts for 435 yards, 36.8% of them were deemed successful plays and that’s on the low side for running backs. Additionally, 15.4% of those attempts resulted in either no gains or lost yardage. 65% of McCaffrey’s receptions, however, resulted in successful plays. Do keep in mind, however, that McCaffrey caught 70.8% of all passes thrown his way this season and that his average length of target was 2.5 yards past the line of scrimmage.

I dont want to bash McCaffrey too hard, but the fact of the matter is that he doesn’t belong to be on the same list as the other running backs, Kamara, Hunt and Fournette. He has yards and that’s about it.

Now, if you are still on the fence between McCaffrey and Smith-Schuster, keep in mid that the Steelers wide receiver had more total return yardage than his running back counterpart did and he even had a touchdown.

One final note to add on this battle and that’s the fact that Smith-Schuster was able to compile his stats in 14 games whereas McCaffrey played in 16. Had Smith-Schuster not missed those two games, I doubt there would even be a debate as to whether or not he belonged on this list instead of McCaffrey.

Now, had Smith-Schuster made the list of finalists it’s doubtful he would have beaten out Kamara for the ROTY award, but with that said, he would have presented the rookie running back a bigger challenge than McCaffrey will.