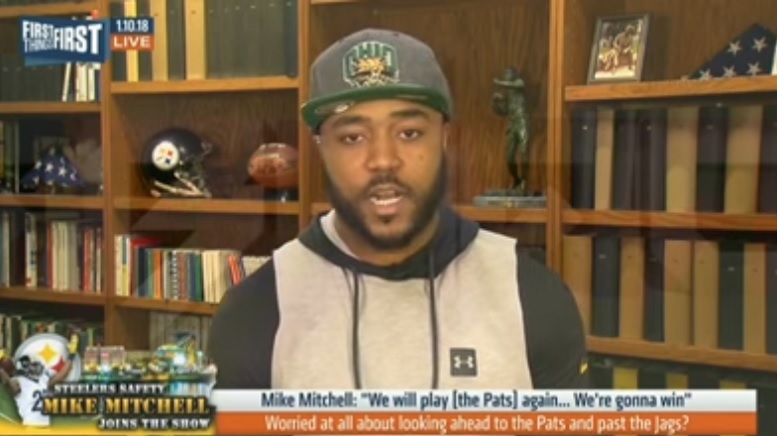 In a recently published interview with The MMQB’s Greg Bishop, Pittsburgh Steelers safety Mike Mitchell created a little controversy of sorts with a quote of his that it made it seem like he and his teammates were looking past the Jacksonville Jaguars this coming weekend and ahead to a possible rematch against the New England Patriots in the AFC Championship game.

On Thursday, Mitchell was a guest on ‘First Things First’ on Fox Sports 1 and the Steelers safety was immediately asked about those comments he made to Bishop.

“It’s one of those things that people in the media do, you know, it was a comment that was out of a 30 minute interview and you know, that’s what gets blown up,” Mitchell said. “But I’m not mad about it at the end of the day. It was the truth as that’s how we feel. But the number one thing is we’re focused on a great opponent in the Jacksonville Jaguars and that’s where our focus is.”

Mitchell was then asked to clarify that what he told Bishop was taken out of context and to confirm that he and his teammates aren’t already looking past the Jaguars this weekend and ahead to the Patriots.

“Jacksonville beat us, I think it was 30 to 9 at our home field. So obviously, they have our main focus, you know,” Mitchell said. “That interview took place after Ryan Shazier was injured. The interview was mostly about Ryan and that was just a comment talking about the game shortly after, when everyone was obviously upset with the controversy of how we lost that football game. Like I said, my focus is on Jacksonville. That’s where it has to be because for us to even get there, that’s who we have to beat. And plus, we have plenty of business with Jacksonville based on how they did us earlier in the year.”

After having to further clarify that the interview with Bishop was from several weeks ago, Mitchell was finally asked to give his thoughts on the Steelers Week 5 loss to the Jaguars ahead of Sunday’s rematch.

“Obviously, they did the job in a big way against us the first time,” Mitchell said. “They have a very formidable defense, you know, I think going into halftime, it was 7-6. I believe we were up 7-6, maybe they were up, but I knew from a defensive standpoint, for the most part, we had done a pretty decent job of keeping them under control. But you know, obviously their defense was able to make plays, we didn’t get enough stops quick enough in the second half and they were able to kind of bleed us. And then obviously in desperation moments, you know, Leonard Fournette breaks the long run against us, which was what really hurt and made him have a good day and really made the score get out of control”

Mitchell was later asked if he would have a hard time recovering should the Steelers lose to the Jaguars and their quarterback Blake Bortles in Sunday’s playoff game.

“Yeah, I don’t foresee that happening. I don’t even think losing is ever an option, especially here in Pittsburgh, Mitchell said. “So, I couldn’t even tell you what I would be thinking or how I would handle it because it’s not even something that I’m thinking about.”

Here’s to hoping that Mitchell doesn’t have to find out what it feels like to lose to the Jaguars and Bortles in the playoffs.

The quote all you guys are talking about is pulled from an interview done a month ago about Ryan’s shazier. Media shouldn’t pull one sentence out of a two day interview a month later and make it a story.