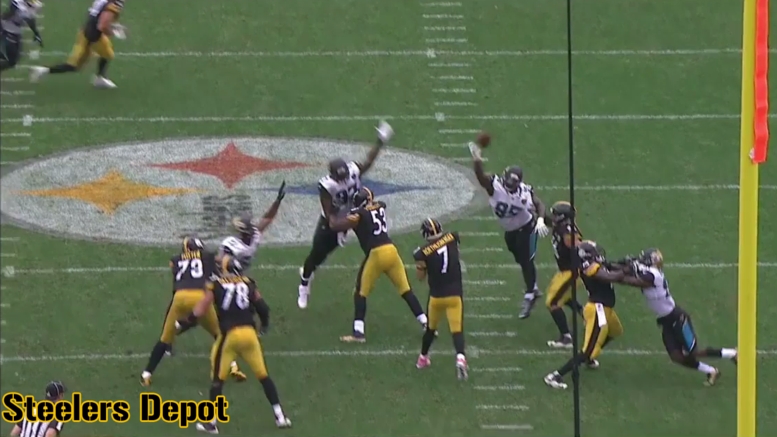 Let the chirping begin. The Pittsburgh Steelers are days away from a rematch with the Jacksonville Jaguars, fresh off their Wild Card victory over the Buffalo Bills. With Jacksonville trouncing the Steelers in Week 5, Ben Roethlisberger was recently asked if he’d like to see the Jags again.

“I’ll give you guys one guess who you think I want to play,” Roethlisberger said on his 93.7 The Fan radio show a week ago.

That guess, of course, was the Jaguars.

“For me, personally, I’d love to prove that five interceptions wasn’t me in that game,” Roethlisberger continued.

Apparently, the Jacksonville secondary caught wind of those comments. Cornerback A.J. Bouye, a prized free agent who has played as such for them, responded to Big Ben’s comments with a clear message: be careful what you wish for. That’s what he told the AP’s Mark Long.

Jacksonville has arguably the league’s best pass defense. They shut down the Bills Sunday, picking up where they left off in the regular season. Opposing quarterbacks had their lowest completion percentage, yards per attempt, second most interceptions, and third fewest touchdowns against the Jaguars defense.

Roethlisberger, of course, was arguably the biggest victim to the secondary, intercepted five times in the first matchup. Two of those were returned for scores. Bouye, for what it’s worth, did not record an interception in the first meeting. He finished 2017 with six of them.

The Steelers offense is in a much better place now than they were then. Roethlisberger has turned his season around, JuJu Smith-Schuster is a staple in the offense, Martavis Bryant is playing better as of late, and the run game has gotten a bit more effective, too.

Forget about all the wishing. What I know is that this is going to be a fantastic matchup to watch.