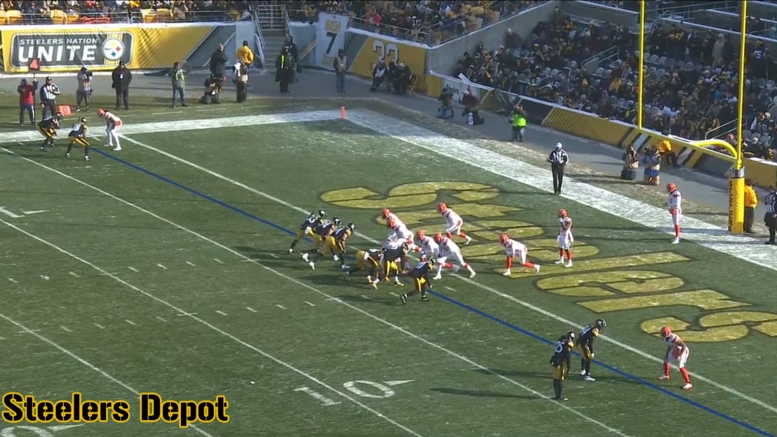 It is beginning to seem to me less and less likely that Pittsburgh Steelers cornerback Coty Sensabaugh will see the second year of his contract, given that he has been supplanted by Cameron Sutton as the top reserve outside cornerback and is now the seventh on the depth chart at the position.

The presence and special-teams success of the other rookie cornerback, Brian Allen, also has a part to play in that story yet to potentially unfold, with both of the young members of the secondary joining to take over the roles that he previously held in the third phase of the game.

But Allen and Sutton have by the end of the season established themselves as core special teams players. Allen has become a starting gunner on punt coverage and jammer on punt returns, occasionally with a role on kick coverage as well. Sutton works on punt returns, sometimes as a jammer, has taken over Sensabaugh’s spot on kick coverage, and also has worked on the field goal blocking unit.

In the finale, their combined work was reserved primarily for the punt units. On an early first quarter punt return, Sutton worked with Artie Burns as a vice jammer, getting a good initial punch near the line of scrimmage.

Allen, working as a solo jammer a short time later, too got a good initial jab on the opposing gunner. A short, misdirected punt, however, prevented any type of return.

The fifth-rounder did have a devil of a time trying to navigate beyond a set of vice jammers into the second quarter, however. He has handled them well in the past, but on this particular example, he was quite simply dominated, not even getting 20 yards down the field. Frankly, it was impressive work by the Browns’ jammers.

I often like to mention whenever I talk about jammer work that I consider it one of the most difficult and thankless assignments in football. It has a relatively low success rate, as you’re basically, in a way, playing pass protection on an island with a quarterback 40-50 yards behind you. Keep that in mind as you watch Allen lose to the inside after his initial field-side jam is defeated.

He is working against Sammie Coates, by the way, and he represented himself better the next time around. It took the former Steelers wide receiver three attempts to finally win the inside, and he had to go inside the numbers, nearly to the hash marks, to do so.

Late in the game, the Steelers actually took Darrius Heyward-Bey out, resting their top gunner. That moved Allen into Heyward-Bey’s spot as they gave some reps back to J.J. Wilcox (who was penalized on the play below). Allen induced a fair catch here (and this is a good example of the difficulty of playing jammer and the analogy of playing pass protection for a deep-set quarterback), but the penalty added five yards from the fair-catch spot.

I don’t know what the future holds for Allen, but as long as they don’t add too much playable defensive talent at his position, he should remain a contributor on special teams. Ideally, of course, he will also develop as a defensive contributor. Sutton is already there, though behind Artie Burns and Joe Haden, not to mention Mike Hilton, his immediate future is as a top backup.