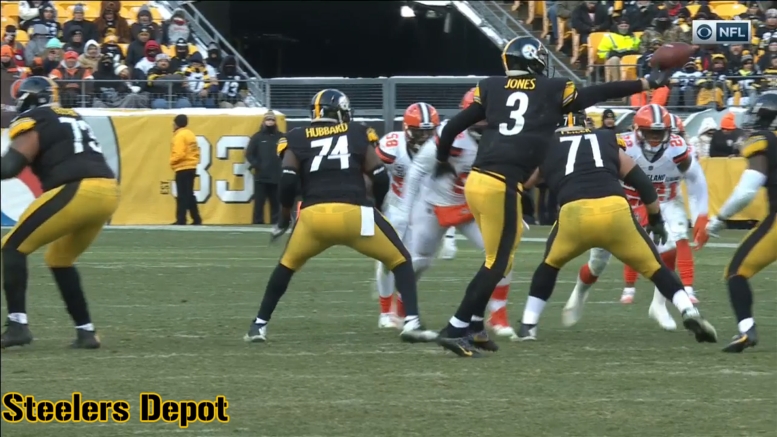 The Pittsburgh Steelers’ 2017 regular season finale was certainly flawed, but they accomplished their objective, which was to win the game while remaining relatively healthy. The even collected a few bonus achievements along the way, including establishing new franchise records for sacks in a season and receiving yards by a rookie. They even added their first kick return touchdown since 2010.

But they didn’t entirely accomplish their intended objective, as they were unable to escape the game without injury. While the Steelers sat starting (Pro Bowl) center Maurkice Pouncey for the regular season finale, their backup center, making his second start their, exited the game injured—and that is when the slapstick started.

B.J. Finney, the second-year former undrafted free agent, making his fourth start of the season and first at center, suffered a thigh injury while pulling to his right on a running play in the first half. Following the injury, he was replaced by Chris Hubbard, who is regarded as a six-position player.

Hubbard, himself a former undrafted free agent, has played all five positions along the offensive line for at least a handful of snaps, plus a good deal of time as a tackle-eligible tight end. But understandably, his weakest position is center. A college tackle, he worked most of his early career at guard, but has settled into tackle for the past two seasons.

And he looked like a player who is inexperienced at center. Hubbard and backup quarterback Landry Jones botched at least three snap exchanges, with the lineman officially credited with three fumbles. The poor exchanges led to three sacks for a loss of 20 yards for the Cleveland Browns.

It is still too early to know much of anything about the nature or severity of Finney’ injury, but he will have roughly two weeks off to recover from the thigh injury. Should he be forced to miss time, Hubbard will have to serve as the backup center during the postseason.

You can bet that he will be taking additional reps practicing the craft of snapping from now until then, if only as a balm for his pride. He certainly cannot be happy with the result. While his future, as recently as this year, 2018, could be as a starting right tackle for another team, right now, he has a role to play on a Super Bowl contender as a do-everything super-sub.

In his fourth season with the Steelers, Hubbard started nine games at right tackle in place of Marcus Gilbert who was limited to action in just seven games due to injuries and suspension. He made the latter’s absence a non-discussion because of his play there.

But he clearly has work to do at center, and he hasn’t played much at guard in years, either, especially following Finney’s emergence, who has started five games at left guard for Ramon Foster in the past two years. Hubbard may have bobbled his chance at center, but his future at tackle—wherever it is—remains bright.