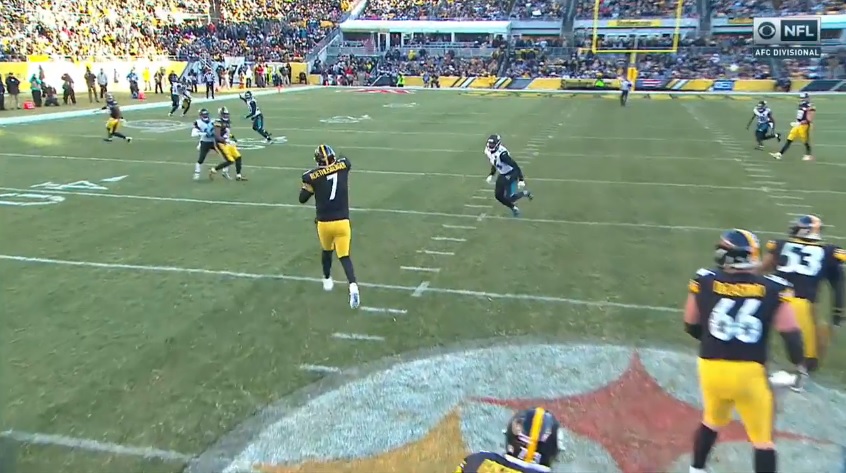 Tons of strong candidates for this one. But his 4th and 5 touchdown to Antonio Brown summed up who Roethlisberger is at this point of his career. Still a big quarterback who isn’t easy to take down but one who is going to climb the pocket more often as opposed to running around behind the line. Someone with still a heck of an arm and all the trust in the world in the game’s best receiver. A risk-taker who asks his guys to make the big play, sometimes to a fault.

That all showed up on this throw. Could’ve tried to run, could’ve tried to hit a checkdown, move the sticks, fight another day. Then again, it is AB…single-covered. Gotta take that chance. Step up from the pressure, make an off-platform throw with the linebacker charging at him, and throw a strike to Brown. Tougher throw too, with proper placement, in stride and to the inside shoulder when most of those deep balls are over the shoulder. It’s money and Brown makes a spectacular catch to complete the touchdown.

This is when that risk-taking gets him into trouble. Too much faith in Brown here. Triple coverage seam throw against a single high safety that Roethlisberger doesn’t even try to move off the near hash. No thought process here, just chucking it up and hoping something good happens. Nothing good happens and Glover Quinn picks it off.

Those forced throws highlighted his worst moments of Ben’s season, which luckily evened out as the season progressed.