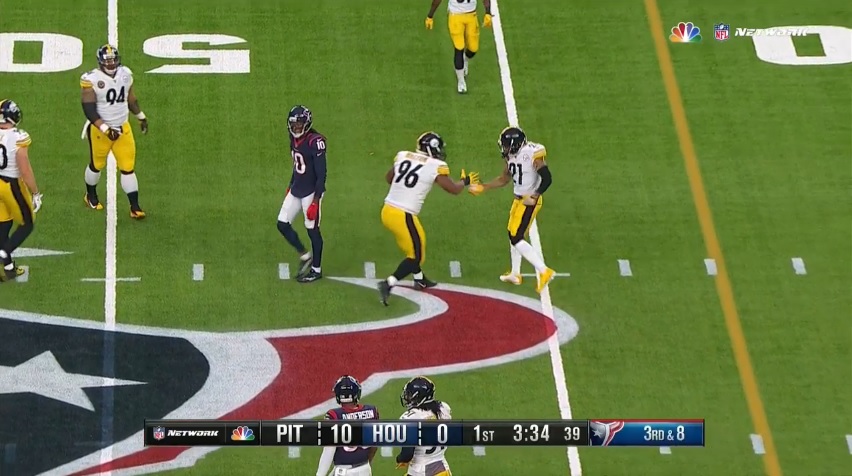 Keith Butler certainly hasn’t been shy about tossing in new wrinkles to the Pittsburgh Steelers’ defense this year. Monday, he unveiled a new one. Or at least, a new one for this era. Joe Haden traveled with DeAndre Hopkins throughout the game, breaking away from the norm of Steelers’ corners playing sides.

Under Butler, there was no shadowing. The corners played left and right, not matched up on a particular guy. Even this year, Artie Burns was the RCB, Haden the left. Until today.

Haden followed Hopkins all over the field. And overall, did a good job. He was held to four catches, 65 yards, and a ridiculous touchdown, though that didn’t come until the game was essentially decided. For much of the game, the Texans’ QBs had to look elsewhere, which was a problem, because there wasn’t much else to throw to.

“He did a great job,” Tomlin said, rare unfiltered praise from the head coach right after the game.

But Tomlin said the team stressed all week Hopkins was the one guy who couldn’t beat the Steelers. And they held him in check. Part of the reason why the Steelers traveled this game was because they could, simply having the talent now they didn’t have in previous years. It was a driving reason for why the team was hellbent on signing Haden.

“But that’s one of the reasons we were really excited about acquiring Joe Haden. Because he is capable of doing those things. Shoot, we’ve seen him do those things in stadiums against us. Travelling against AB. Good to have one of those guys on our group. Glad to have him with us, he did a great job today.”

Officially, Haden finished the day with two tackles and a pass breakup, the near interception you see in the photo of the article.

It’s just another tool in the toolbelt. A year of a Steelers’ defense that’s more versatile and flexible than it’s been under Butler. Gone is the mess of what happened last year, a static, predictable group picked apart by the league’s top tier offenses. Even with injury sapping talent, and legitimate concerns about the defense going forward (run defense and communication are two biggest issues), they won’t go down doing the same thing over and over again.