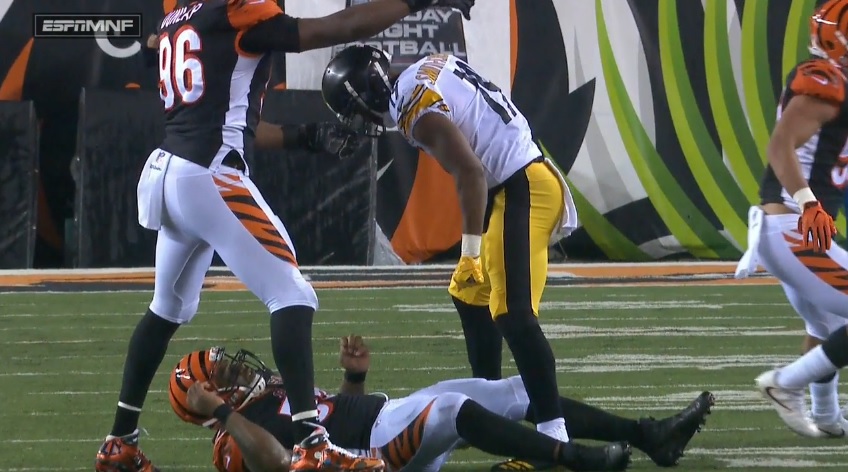 For a rookie, every game could be summed up as a teachable moment. A fast learned, JuJu Smith-Schuster has been tabbed as a guy who doesn’t make the same mistake twice. Hopefully that’ll include what happened last night. Like it or not, Smith-Schuster’s hit on Vontaze Burfict was illegal and standing over him and taunting didn’t do him any favors. In fact, Mike Tomlin says that’s the most teachable moment of them all.

“I’ll stand by my statement last night,” Tomlin told reporters. “His actions after the hit are more disturbing than the hit itself. Often times, plays like this are teachable moments. When you look at it, you have the opportunity to talk about ways you can be be safer. He’s a better sportsman than he displayed. After the block. You gotta acknowledge that.”

Obviously, most Steelers’ fans loved the hit. But outside of Pittsburgh, reaction was – at the least – mixed, and some are calling for Smith-Schuster to be suspended. A far cry from a guy who was a fan favorite across the country, whose claim to fame was a stolen bike and not letting girls slide into his DMs.

Reputation is something Smith-Schuster and Tomlin said they want to uphold.

“He’s gotta work hard so that people understand the type of man he is from a sportsmanship standpoint,” Tomlin added. “And that’s not going to happen overnight. That’s just the reality on plays like that.”

As we pointed out last night, you can certainly expect a hefty fine coming his way and a suspension, though unlikely, can’t be ruled out. Not just for the hit alone but the taunting afterwards, which, even if it isn’t the reality, could be construed as a malicious and intentional act.

To JuJu’s credit, he apologized immediately after the game both to reporters and then on social media.

I don’t have any intentions to hurt anyone when I play football. I didn’t mean to hurt Vontez Burfict, I just wanted to throw a block for my teammate. I apologize for standing over him and that isn’t me. Praying he gets better.

We should know in a couple days where the league stands on all of this.