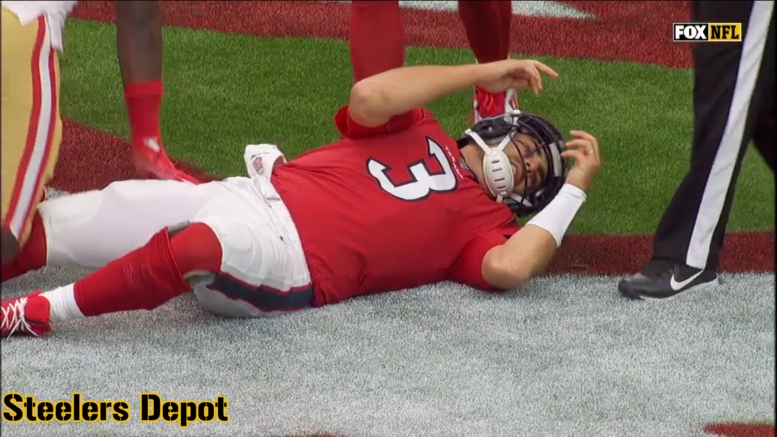 We pretty much already knew going into Monday’s game that the Pittsburgh Steelers would be facing a third-string quarterback in T.J. Yates, but now the Houston Texans have officially placed former Pittsburgh quarterback Tom Savage on injured reserve after suffering a concussion recently, shutting him down for the remainder of the season.

Savage, in his fourth season in the NFL since being drafted by Houston in the fourth round of the 2014 NFL Draft, was projected to be the starting quarterback at the beginning of this season after they traded Brock Osweiler, whom they signed to a $17 million per season contract just the year before.

He did end up starting the season opener, but he was benched at halftime in favor of their rookie first-round draft pick, Deshaun Watson, who was having an excellent rookie season before he suffered a torn ACL. Savage then resumed the starting role until he suffered a severe concussion in Week 14 against the 49ers.

In all, Savage started seven games this year, which was a career high. He only completed 125, or 56.1 percent, of his 223 pass attempts, throwing for 1412 yards for 6.3 yards per pass attempt. He threw five passes for touchdowns and six for interceptions, while also losing seven of his eight fumbles. The Texans went 1-6 in the games he started.

The 27-year-old began his college career at Rutgers, where he started as a true freshman. He averaged 7.8 yards per pass attempt, throwing 14 touchdown to seven interceptions, but he was seated in favor of Chas Dodd in 2010, who was also a true freshman.

After his benching, Savage transferred twice, first to Arizona in 2011, and then to Pittsburgh, and because of that he was not eligible to play again until 2013. But he started for the Panthers that season and threw for nearly 3000 yards with 21 touchdowns and nine interceptions, rushing for an additional three touchdowns.

For his career, he has completed 57.5 percent of his passes for exactly 2000 passing yards with five touchdown passes and seven interceptions. He spent the 2015 season on injured reserve, and will be an unrestricted free agent this offseason, though one might not be inclined to expect there to be a big market for his services, at least not as a starter.

Arguably, his most significant contribution during his pro career so far has been exposing the flaws in the NFL’s procedure for identifying concussions. His very visible and worrying signs of head trauma during the Week 14 game were somehow overlooked, and he returned to the game before ultimately exiting.