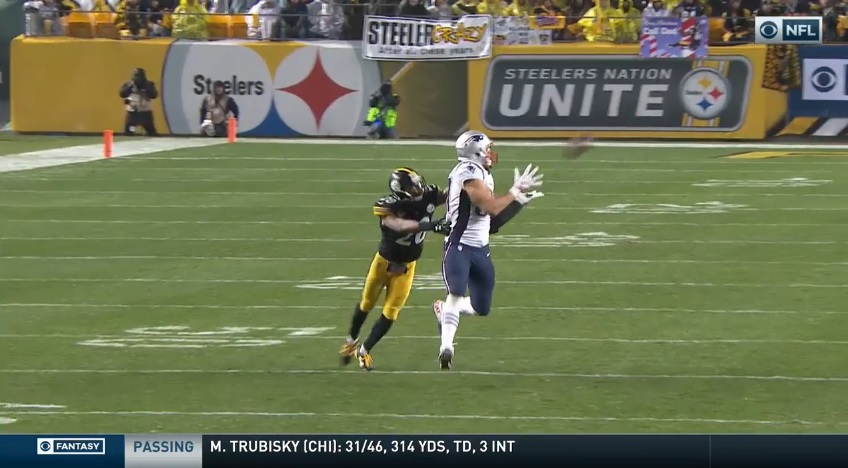 Well, now that a few days have passed and the bad taste in the mouth of Steeler Nation has (hopefully) gone away, it’s almost time to move onto the Christmas Night matchup with the Houston Texans.

However, I have to revisit the matchup against the New England Patriots and the Pittsburgh Steelers one last time to take a look at the missed tackles on the part of the Steelers.

While the loss still stings, the good news is the Steelers were solid in the tackling department against the Patriots, who are a dink-and-dunk offense that looks to force missed tackles while possessing the ball. Fortunately for the Steelers, they rarely missed tackles that led to splash plays, which is a far cry change from the past few weeks.

As you can see, 8 missed tackles against the Patriots and their style of offense isn’t bad at all. In fact, it hit me quickly in the second quarter how good the Steelers looked tackling in space, which is a major improvement from last week’s performance against the Baltimore Ravens.

Yes, we all know how bad of a game Sean Davis had. With Ryan Shazier out for the year, Davis is closing quickly on overtaking the team lead in missed tackles. For as much talent and athleticism that Davis has, he’s far too out of control on tackles and sometimes tries to do too much, as evidenced by Sunday afternoon’s performance.

I still think he’s going to be a good safety for years to come in Pittsburgh, but I also understand the frustration and doubt that most fans have with him right now.

Aside from Davis, rookie Cam Sutton makes his inaugural appearance on this list, missing one tackle in heavy action on Sunday against the Patriots.

If you’re going to miss, have it be on a play where you don’t even really wrap up on a guy, like Sutton does against Dion Lewis to start the second half.

Sutton starts this play off lined up in the box, about five yards off the line. He doesn’t look very comfortable in this area, which is understandable because he has very little (if any) experience in the box.

Once the ball is snapped, a huge lane opens in front of Sutton, who hesitates to close down into it, allowing Lewis to bounce outside into the lane, where it becomes a one-on-one matchup between the back and Sutton in space.

Sutton will never profess to be a physical tackler, and that occurs here on this play as he goes biting at ankles, allowing Lewis to easily step through for a 5-yard gain.

This was just the second target of the day for Rob Gronkowski from Tom Brady as Gronkowski is matched up in coverage against Davis. Working up the seam, Gronkowski is able to get inside Davis and work towards the middle, making for an easy completion to big, lumbering tight end.

Once the catch is made, Davis is in perfect position to make a sound tackle on Gronkowski to negate any additional yardage. Going low from behind against anyone is usually a good call when tackling, as long as you wrap up.

Davis doesn’t do that, allowing Gronkowski to wiggle free for another 4-5 yards before Mike Mitchell has to clean up the big tight end. Yes, Gronkowski is one of the hardest receiving threats to tackle in the NFL due to his size and strength, but Davis is no slouch in that department.

Bud Dupree struggled on the Patriots’ second-to-last drive of the game, recording both of his misses on Lewis on runs out of shotgun.

After faking the blitz, Dupree drops back towards the middle of the Steelers’ front 7, almost in a spy technique. He reads the run well and comes over to try and stop Lewis for a minimal gain. He does everything right but wrap up on Lewis, allowing him to break free of the tackle attempt for additional yardage.

This miss was the second one of the drive by Dupree, and both came on similar runs. He has been an outstanding run defender all season long, but he came up small on a big drive for the Steelers defense.