The Pittsburgh Steelers will play their Week 16 game on the road Monday afternoon against the Houston Texans and a win could result in them securing a first-round bye in the playoffs depending on what happens in one other Sunday game. There are quite a few other entertaining games taking place on Sunday, so with that, here is your fan rooting interest guide for Week 16 in addition to the AFC seeding picture entering today’s games.

Do you believe in Christmas miracles? If so, you’ll be hoping an angel gets its wings Sunday in Foxborough. A few weeks ago in Buffalo the Patriots beat the Bills by 20 points and thus it’s not surprising New England is double-digit favorites this time around at home. The Patriots, however, remain a banged-up team. The Bills are fighting for their playoff lives and really need to win out to make the postseason. It’s hard to imagine that the Bills will upset the Patriots, but we saw the Miami Dolphins accomplish the improbable feat a few weeks ago. The Steelers need the Patriots to lose another game in order to have one more shot at getting the No. 1 seed in the AFC and with New England’s final game being against the New York Jets, you better hope the Bills pull off the upset a few hours from now.

If you believe that the Steelers can beat the Texans and Cleveland Browns to close out their regular season then the Jaguars are no threat to them. Because of that, Steelers fans should probably root for the Jaguars to win out so that they can get the No. 2 seed in the AFC should the Patriots wind up stumbling Sunday afternoon. While the Jaguars are road favorites in Week 16 it will be interesting to see their top-rated defense go against 49ers quarterback Jimmy Garoppolo on Sunday. This should be a great game to watch regardless of what side of the rooting fence you’re on and if you’re the nervous type and want the Steelers to clinch a first round bye Monday night, you should root for the Jaguars to lose or tie late Sunday afternoon. 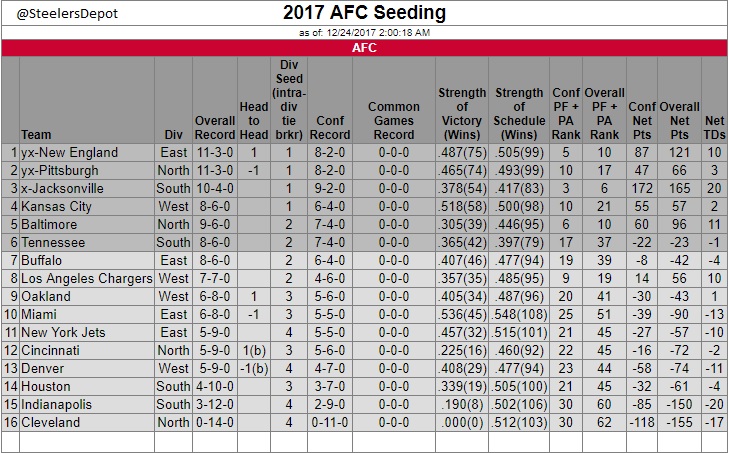