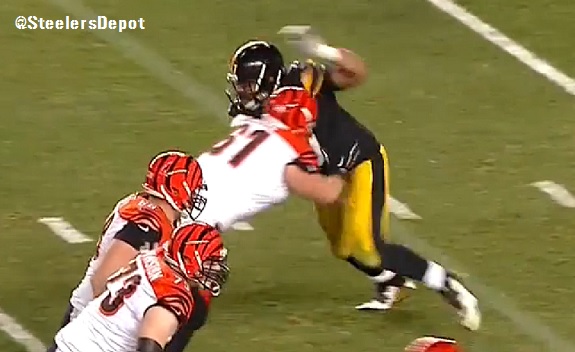 While the Pittsburgh Steelers can feel free to tout their successes as a primetime team—as I wrote about yesterday, they have won each of their previous 10 games with nighttime kickoffs, going back to the Le’Veon Bell walk-off touchdown against the Chargers a couple years ago—the Cincinnati Bengals have no reason to be excited about playing under the lights.

Unfortunately for them, they will be hosting the Steelers on Monday night this week as they seek their sixth win of the season, crawling back up to a .500 record for the first time since…well, since the season started and they were 0-0.

The Bengals have had just two scheduled primetime games this season, the Steelers game being the second. The first came in week two, hosting a Houston Texans team that came into their house with a rookie quarterback and won a scrappy game, 13-9.

During an interview portion of practice recently, quarterback Andy Dalton was asked if there is “anything that makes you sicker than hearing about primetime games”. He laughed, and said simply, “all we’ve got to do is win. That’s all it comes down to. That’s our goal”.

But one might wonder if there is something more to it than simply winning. Dalton and the Bengals have been a mostly successful team since he has come on board. They went to the playoffs a number of years in a row for the first time in decades. Yet they have an abysmal record in prime time.

Since Dalton’s rookie season in 2011, during which they did not even participate in a single game under the lights, the Bengals have gone just 5-14 in games that kicked off at 7 PM or later. That is a winning percentage of just .263, and they have not posted a winning record under the lights in any season.

Cincinnati had three games under the lights last season, during which they went 1-2, defeating only a Dolphins team that got off to an awful start before becoming a playoff team. They also lost to the Giants and Texans.

They had a full slate of five primetime games in 2015, and they lost four of them. The only team that they beat was the Browns, losing to the Steelers, Broncos, Cardinals, and, for the third time in three years, the Texans. Why are they always playing the Texans in prime time, anyway?

In the Dalton era, the Bengals are 1-4 against the Steelers in prime time. of course, they also have a terrible overall record, going just 3-11 against them since 2011.