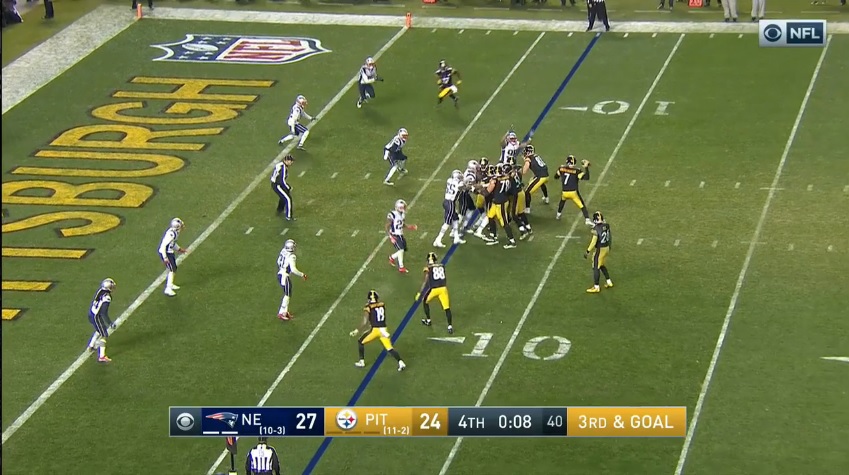 I didn’t want Ben Roethlisberger to spike the ball. I’m glad he didn’t. But I can’t imagine anyone is happy with what the Pittsburgh Steelers substituted. And I’m not talking about the result, the hindsight of the outcome, an interception that sealed the win for the Patriots. I’m talking about the process. For all the end-of-game absurdity, that’s most frustrating.

Bouncing off what I’ve said on Twitter and touched on in my video recap, the Steelers can’t control what decision the refs come to. What they can control is their response. And that wasn’t a passing grade. Not even close.

After the refs ruled Jesse James catch wasn’t so, the Steelers ran two plays. A pass to Darrius Heyward-Bey, tackled in bounds, which forced Pittsburgh to rush to the line of scrimmage. Roethlisberger wanted to spike it, the coaches didn’t, so Ben drew up a one-route play to Eli Rogers, a slant route that was tipped and intercepted.

Not spiking the ball was the right decision. There shouldn’t be any debate about that. But how is the fake spike the final call? Here’s my issue. The offense had all the time in the world to come up with a contingency plan if James’ catch was overturned. An opportunity to call at least two plays, the second for the situation that played out. Tackled in bounds, clock running, not wanting to spike the ball. It’s not like it’s a difficult or unique thing; two plays get called in the huddle all the time.

You need a second play if someone gets tackled short of the end zone, just as DHB was. Or if Roethlisberger gets sacked. Or whatever happens.

Instead, it was a discombobulated mess. Quarterbacks and coaches not on the same page of what to do, spike or not, let alone a full-fledged play to call. The result was only one receiver actively participating, Rogers, the smallest receiver on the field, running a slant into the teeth of the Patriots’ defense. Everyone else stood there, essentially just fans with the best seat in the house, and Roethlisberger forced one over the middle.

We can, and I suspect we will, talk about the James decision for a long time. But what’s more relevant, more controllable, is everything that came after.

The catch rule is definitely ugly. It needs revamped.

But so does the Steelers’ strategy. It proved just as costly.