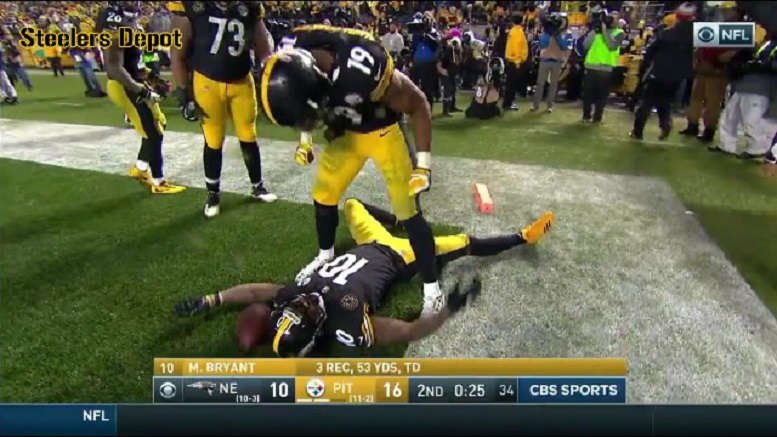 Pittsburgh Steelers rookie wide receiver JuJu Smith-Schuster is one creative human when it comes to post-touchdown celebrations as evidenced by what he did during Sunday’s loss to the New England Patriots.

Following a second quarter touchdown reception by Steelers wide receiver Martavis Bryant, Smith-Schuster decided it was time to revisit his illegal hit on Cincinatti Bengals linebacker Vontaze Burfict. Well, more specifically, he revisited him standing over Burfict and taunting him. The second-round draft pick knocked Bryant to the ground and then straddled him with both legs while looking down at him just as he did with Burfict several weeks ago.

Burfict, by the way, suffered a concussion as a result of that hit from Smith-Schuster and has yet to play in a game since. As for Smith-Schuster, he was suspended one game for his illegal hit on Burfict and while many still think it was a result of him also taunting Burfict while he laid on the ground, the league has since denied that claim.

Was Smith-Schuster’s Sunday celebration and mocking of Burfict in poor taste? I will let you all decide.

From hide-and-seek to this in one season. Boy, do these young players grow up fast.