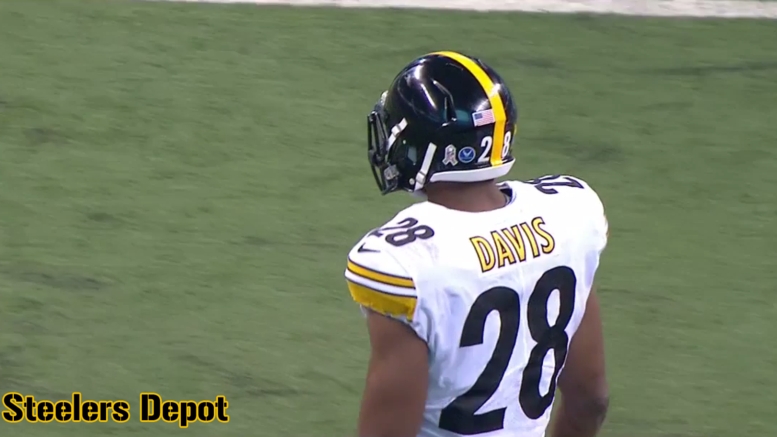 The Pittsburgh Steelers just played their best game in several years that they have against the New England Patriots, but when all was said and done, it was still not enough, as they fell late by the score of 27-24, handing over control of the number one seed to the victors.

There are a number of moments to which one might point in talking about how the result could have differed, and the same is true for just about every game ever played, but two late plays in this one stand out, and are worth talking about.

In no way does the loss fall upon the shoulders of either of these two plays alone, but the failure by Sean Davis to secure a late interception and tight end Jesse James, failure to maintain possession through contact with the ground on a touchdown that was overturned obviously helped set the table for how the game ended.

The former play came with just over two minutes remaining. On the Patriots’ previous drive, they were able to cut into an eight-point lead with a field goal, and the Steelers subsequently suffered their first three-and-out of the entire evening.

On the second play of New England’s ensuing possession, Tom Brady had his pass tipped at the line of scrimmage by defensive end Cameron Heyward, which redirected the ball’s trajectory and put safety Davis in position to come down with the football. While it would not have been a routine interception, it is one that was very makeable.

That failure to capitalize on the opportunity breathed new life into New England’s offense, and tight end Rob Gronkowski then took over. Brady and Gronkowski connected for a 26-yard reception on the next play, and then repeated the process for a total of 52 yards in two plays. The pair connected once again for 17 yards with the tight end plucking the ball just inches off the ground.

The Steelers called a timeout with a minute remaining, and Dion Lewis scored from eight yards out on the next play. Gronkowski then forced the issue with an easy reception for a two-point conversion that forced the Steelers to need a field goal to win.

Keep that fact in mind, because after a 69-yard reception by JuJu Smith-Schuster came the 10-yard would-be go-ahead touchdown from James. While he made a fantastic effort to try to score with no timeouts remaining, he lost possession of the ball after crossing the plane, not managing to complete the process of the catch.

After the touchdown was overturned, Roethlisberger faced heavy pressure on his next two passes, the second of which was rushed after Darrius Heyward-Bey was tackled inbounds. The quarterback forced an inside slant throw to Eli Rogers, which was popped up for an interception.