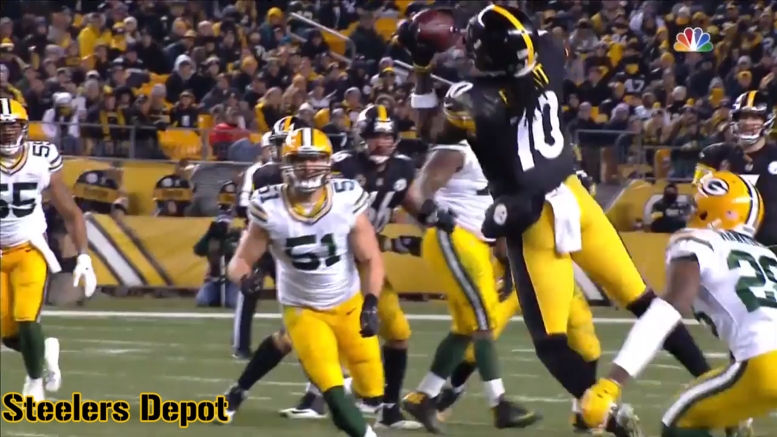 While the Baltimore Ravens statistically have one of the top secondaries in the league, using just about any measure you want to come up with—yardage, touchdowns, interceptions, efficiency numbers—they are also about the embark on a new chapter in their unit, down their best cornerback, Jimmy Smith, whose season ended prematurely with a torn Achilles.

Starting in his place will be Marlon Humphrey, the Ravens’ rookie first-round draft pick, though it is possible that Maurice Canady could also see some action, particularly in the event that the former struggles. Humphrey should be playing on the defensive right side, across from where Antonio Brown primarily lines up.

But the Pittsburgh Steelers do, of course, mix and match where their wide receivers line up. Brown, for example, has lined up on the outside to the left 444 times this season, and to the right 277 times, so he still sees almost 40 percent of his snaps on the right side.

Martavis Bryant’s left/right splits are even closer together, and with JuJu Smith-Schuster missing tonight’s game, he should get plenty of playing time, and plenty of opportunities to play on both the left and the right side.

And I must say that I do find myself intrigued by the potential of getting Bryant against the rookie cornerback, who has been beaten over the top a few times, including in the team’s most recent game, and whose experience prior to Smith’s injury came inside.

I think it’s a safe bet that Bryant is a player who is determined to make an impact, even volunteering to return kicks as a way to get more touches during the game—a decision for the team that has so far seemed to be a positive development for both parties.

While the deep connection between himself and Ben Roethlisberger this year has been rather wanting—two of his five drops this season are on targets of 40 or more yards in the air—those connections have to come at some point.

The pairing only has one reception on passes thrown 20 or more yards in the air, that coming back in week two, but they have a number of connections from 15 to 19 yards in the air. In fact, Roethlisberger has completed six of seven passes in that range to Bryant for 112 yards and a touchdown.

However his opportunities come, and whoever they come against, however, Bryant knows that this is a golden opportunity for him with Smith-Schuster serving a one-game suspension, and likely his last best hope to make a big impact during the course of the 2017 season.

The third-year wide receiver has continued to make a couple of clutch catches per week since the bye, and has been a positive and meaningful contributor without the ball in his hands, but he wants to be the one in the end zone, and the Steelers would like to see him there more often as well.