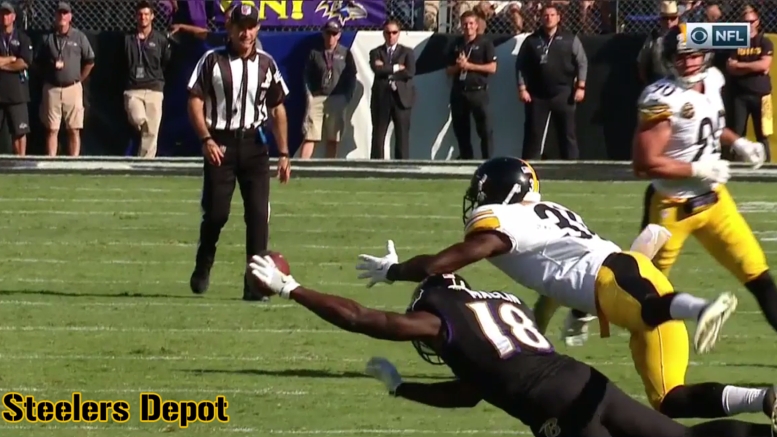 Hypothetically, the Baltimore Ravens were supposed to have surrounding their quarterback, Joe Flacco, with the best group of wide receivers that he has ever played with in his career. Coming off something of a rejuvenating season a season ago was Mike Wallace, as former first-round pick Breshad Perriman headed into his first full healthy season. Joining them late was a signing that seemed a coup, the addition of Jeremy Maclin.

It hasn’t exactly panned out as they’d envisioned, as, the offense has more often than not been an albatross around the neck of an excellent defense. That proved to be the opposite on Sunday night when they put up 38 points and the defense surrendered 39, but Maclin wasn’t much a part of that equation.

Against the Pittsburgh Steelers, in fact, the former Pro Bowler had just three receptions for 27 yards and a few missed connections between himself and Flacco. That included a near-catch at the right sideline late in the game that was reviewed but determined that he was out of bounds.

After weeks of average production—he has just 12 catches for 108 yards without a score over the course of the past four games, an average of three catches and 27 yards per game—or exactly his stat line against the Steelers—Maclin is searching for a solution.

“I’m not going to sit here and say that there is or whatever”, he told reporters yesterday after being asked if there was concern about his rapport with Flacco. “But for whatever reason, especially in the last game, it just didn’t click. I’m not going to beat myself up about it. That’s what preparation is for. So we’ll continue to go out there and continue to get on the same page”.

The game before this four-game skid, Maclin had season highs in receptions and receiving yardage with eight for 98. He only one other time caught more than four passes this season, and only twice more picked up at least 50 yards receiving.

No doubt one of the reasons Maclin and Flacco have struggled to work in sync so often this year is because, frankly, they had not played together very much. The 29-year old only signed with the team in mid-June, and when training camp opened, Flacco was dealing with a back injury that kept him out until the regular season started.

But Flacco and Wallace are not exactly tearing apart the NFL, either. In 12 games, the former Steeler has 37 receptions for 559 yards and three touchdowns, and that is with a recent uptick in production. The bottom line is that, generally, the Ravens’ passing offense hasn’t been very good.