You’ve probably already seen the video if you weren’t watching Monday Night Football when it first happened.  Steelers star ILB Ryan Shazier, making a tackle on Bengals WR Josh Malone, fell to the ground on his right side.  But instead of getting up, he grabbed at his back with his left arm and then used his upper body to turn onto his back.  And then he lay there…while teammates kneeled around him, while fans wrung their hands at home, and finally while the trainers brought a backboard and the cart.  All the while, not moving his legs.  The announcement came that Shazier was taken by ambulance to a local hospital for further evaluation.  Steelers Director of Communications Burt Lauten tweeted that no further updates would be provided.

By the end of the often brutal 23-20 Steelers victory, however, some hopeful news came.  NFL Network’s Aditi Kinkhabwala tweeted and also reported live that Shazier had sustained a spinal cord contusion.  The Post-Gazette’s Ed Bouchette followed that with a report that players told him that Shazier in fact had a spinal cord concussion.  Finally, Burt Lauten posted an update from Steelers General Manager, Kevin Colbert:

While Shazier is being monitored overnight, we still don’t have an official diagnosis.  So let’s look at spinal cord concussions and contusions while we wait for the morning to come with hopefully good news.  As always, we’ll start with a quick review of the anatomy. 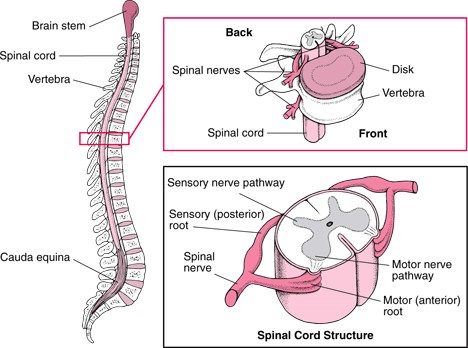 The severity of an injury depends on the part of the spinal cord that is affected. The higher the SCI on the vertebral column, or the closer it is to the brain, the more effect it has on how the body moves and what one can feel. More movement, feeling and voluntary control are generally present with injuries at lower levels.

Tetraplegia (a.k.a. quadriplegia) results from injuries to the spinal cord in the cervical (neck) region, with associated loss of muscle strength in all four extremities.

Paraplegia results from injuries to the spinal cord in the thoracic or lumbar areas, resulting in paralysis of the legs and lower part of the body.

A complete SCI produces total loss of all motor and sensory function below the level of injury. Nearly 50 percent of all SCIs are complete. Both sides of the body are equally affected. Even with a complete SCI, the spinal cord is rarely cut or transected. More commonly, loss of function is caused by a contusion or bruise to the spinal cord or by compromise of blood flow to the injured part of the spinal cord.

A contusion is a bruise, caused by bleeding and the resulting inflammatory response.  When this occurs in the spinal cord, the swelling that results can decrease blood flow and oxygen delivery to the spinal cord, making the injury worse.

Treatment is focused on maintaining oxygenation and administering IV fluids to prevent low blood pressure and therefore low blood flow.  Steroids may also help to reduce swelling.  Recovery of function is typically seen within the first 72 hours.  Beyond that, any residual nerve injury may be permanent, but improvement can continue for the next 6-12 months.

Also known as cervical cord neuropraxia (CCN), this is a truly transient or temporary injury.  It is characterized by variable degrees of motor and/or sensory loss which can resolve completely within 24-72 hours.  Like many injuries, there is a grading system:

Spinal cord concussion is typically caused by a sport-related injury, with the impact occurring as an axial loading force to the head with the neck in either flexion or extension.  Not surprisingly, this occurs most commonly in football.  As many Steelers fans recall, Tommy Maddox suffered a similar injury in 2002 and missed only one game.  Ben Roethlisberger was diagnosed with this in the final game of the 2009 season.  Both QBs had a full recovery.

SO WHAT ABOUT SHAZIER?

We are still waiting for clarification on the exact nature of his injury.  According to some of the Pittsburgh media, Shazier told Vince Williams that he was already experiencing return of sensation to his legs as he was carted off the field and texted him after the game to say that he would “be OK”.

The most promising part of the update from Kevin Colbert was the possibility that Ryan Shazier could potentially return to Pittsburgh as early as today.  That would indicate that he was stable to be moved and suggests that his clinical situation was improving.

Based on the mechanism of injury and the specific motor and sensory loss Shazier appears to have experienced, I am guessing – and hoping – that he did have a spinal cord concussion, and that the information that Bouchette received was accurate.

For now, we must hope for the best for Ryan…first and foremost, for a complete recovery.