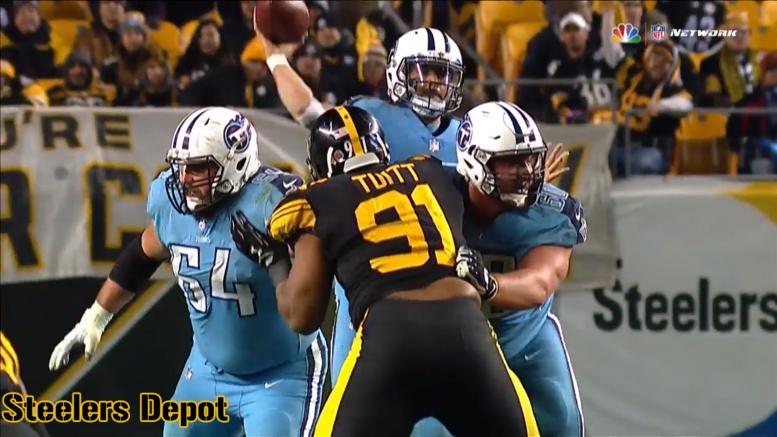 The acquisition of veteran defensive end Tyson Alualu in free agency was a fantastic decision. There is no point in denying that. He has been the Pittsburgh Steelers’ second-highest defensive lineman in snaps so far this year behind only Cameron Heyward due to injury, and he has put in solid work when he has been out there.

But he simply is not Stephon Tuitt, which the former second-round pick has sought to remind us over the course of the past two games since he has returned to the field after the bye week. Having missed the majority of the first half of the season with a bicep injury followed by a back injury that may have been a complication of the aforementioned, he is finally fully healthy and ready to go.

I am inclined to believe that it is no coincidence he now has sacks in back-to-back games, his first two of the season. And he even had a third that was taken away due to a defensive holding penalty in the secondary, which had little to do with the play, if memory serves.

The Steelers paid up, backing up the truck to dump several wads of cash in front of the young product of Notre Dame, just before the season got under way, and he was determined to assure that he was worth every penny. He made plays on his first two snaps of the season before the initial injury occurred, postponing that demonstration.

Tuitt has six tackles and two sacks in the past two games, but not even that stat lines gives proper accreditation for the sort of impact that he has on a typical game. He creates plays for others, though not always in the traditional manner of the prototypical two-gapping 3-4 defensive end.

The Steelers’ defensive ends of today’s defense, which primarily operates out of the nickel, draw more one-gapping responsibilities—though not as many as might be perceived—but are more free to create penetration than in the past. That is part due to the way the game has changed, but also due to the athleticism of their two stars.

As much as Heyward is truly a physical specimen, Tuitt is even more so, and that becomes readily apparent on the field—which made his loss against DeMarco Murray in the hole last night so startling, I think.

But his speed and power to create penetration, both in the running game and as a pass rusher, is a disruptive presence that causes running backs to redirect into the path of other defenders, and forces quarterbacks to scramble. Tuitt is one of their most consistent play-to-play performers, which is not fully realized on his stat sheet.

Of course, it’s not like the Steelers are not aware of this. There is a reason they just gave him a bunch of money. And it helps that he is still just 24 years old, and won’t turn 25 until May. He is going to be making plays for years to come.