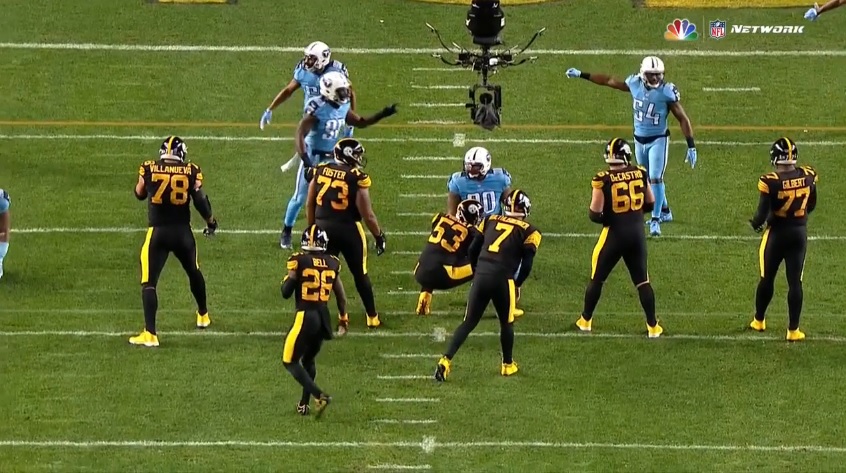 The weekend hangover from a Thursday Night Football game is like looking down to your bowl of cereal and in deep disappointment realizing you ate all of your Crunch Berries already. All you have left is plain old Cap’n Crunch.

Yet, following a 40-17 obliteration of the Tennessee Titans, we are at least left with a mellifluous glow of contentment. Like the cat lying on its back, rubbing his tummy with goldfish fins on the corner of his whisker smiling mouth.

Ah…all those wonderful reels of football highlights, still playing through our brains like our own personal Cinema Paradiso.

QB Ben Roethlisberger looking like…well Big Ben. WR Antonio Brown flashing back with a scintillating helmet catch that transported us gloriously back to his rookie sideline shuffle that ceremoniously launched his career.

The Steelers dispatched of the Titans in a way Steelers Nation has been pleading…nay…begging for all of the season long.

See we weren’t wrong. Steelers Nation knew you had that potential all along. Now…let’s give this one a good Spin.

It’s evident WR Martavis Bryant has some people in his life who are speaking wisdom in his ears. These are clearly people who really care about his well being. Many of them are undoubtedly within the Steelers organization. It’s easy to cite the public slip-ups that Martivis has made this year. Much less known, invisible to some, are the strides he is making day by day, both personally and professionally.

He’s become my favorite storyline of the season. I root for him every time he touches the ball or even when he embraces a teammate to share in their success. There is no stronger organization for Martavis to rebuild his life and career around than that of the Pittsburgh Steelers. Some things are more important than football. Well…actually most things are, young man. Take your time, Martavis. Your time is coming.

Everyone is talking about the dramatic impact the addition of CB Joe Haden has had on the Steelers just before the season started. And it may end up being one of the best free agent acquisitions for the Steelers in years. But, not to be overlooked was the emergence of Coty Sensabaugh in the secondary during the preseason. Those who were paying attention would have noticed that Sensabaugh can flat out play.

How did we notice? Because we didn’t notice him. He does what every good cornerback does, he makes receivers invisible. Did he get burned extra toasty against the Titans? Yeah…but in a quarters defense he should have gotten by with a little help from his friends. The young man is Stone Cold. He’ll do just fine in Haden’s absence and when Joe returns this secondary will be all of the more deeper for it. The Steelers secondary will soon enough be secondary to few others.

If The Schu Fits

I wrote something stupid a few weeks back. Okay…I write a lot of stupid stuff. It sells like crazy. I had intimated that WR JuJu Smith-Schuster would never be number one receiver material. Not only would I like to take that shoe out of my mouth, but I’d like to make an even bigger statement. The kid might end up someday breaking many Steelers receiving records.

I know…I know…it’s blasphemy with the great Antonio Brown still in his prime. But, with JuJu, you have a talented player, who will be loved enough by fans to get several contracts and may have another 15-18 playing years ahead of him. Crazy thinking? Yes…probably, because with the way Brown takes care of his body he may not retire until he’s 50. But this JuJu guy? Yeah…he’s the full package.

People who say Ryan Shazier misses too many tackles? That’s like looking at a masterpiece by Renoir and saying, “But it’s fuzzy”. Shazier never was a Tyrannosaurus Rex. He’s the lead Velociraptor. He’s the first to the kill. His job is to distract the flow of the play until the rest of the defense can catch up and get into his time zone. That’s art, baby. Start loving it for what it is. Oh…and he is also number five in the NFL in total tackles.

It’s time again to “Say hey!” for Darrius Heyward-Bey. If you’re ever wondering who is the guy running ahead of everyone to race toward the returner on special teams, it’s Heyward-Bey. Here’s a guy who was a supposed high draft pick flop who has quietly transformed himself into the one of the elite special teamers in the league. These are the type of quiet performers who provide the foundation for championships.

Apparently, everyone but me hated the SkyCam coverage of the Steelers and Titans game. From my perspective, Ben Roethlisberger never looked better this year. Oh? What? Was it because he played better? Well…that too. Still, he should bring that SkyCam around with him every game. He looked masterful, and only after a bit of a slowdown in the second quarter he appeared to be in complete control. Maybe less Le’Veon Bell equals better Big Ben? They might consider getting his throw count in early from here on out.

Some Things You Miss…And Some Your Don’t

I loved seeing the older Pittsburgh players embracing Coach Dick LeBeau after the Titans game. If I could, I would have given him a hug myself. He really got “the treatment” when he was chased out of Pittsburgh. He deserved better.

Still, I have to admit, although I miss the man, I don’t miss his defense those last few years for the Steelers. There were probably more kitchen utensils thrown at the television through the years while watching his corners play twelve yards back on a 3rd and 3 than on any others. I like our defense now. Our corners may get burned deep here and there, but at least we man up.

Why does this feel like another bye week? Haven’t we had our fill? Well…at least the Steelers will have some extra time to heal up and be ready for the Green Bay Packers next week. As for me? I’m going to go look for some Crunch Berries.