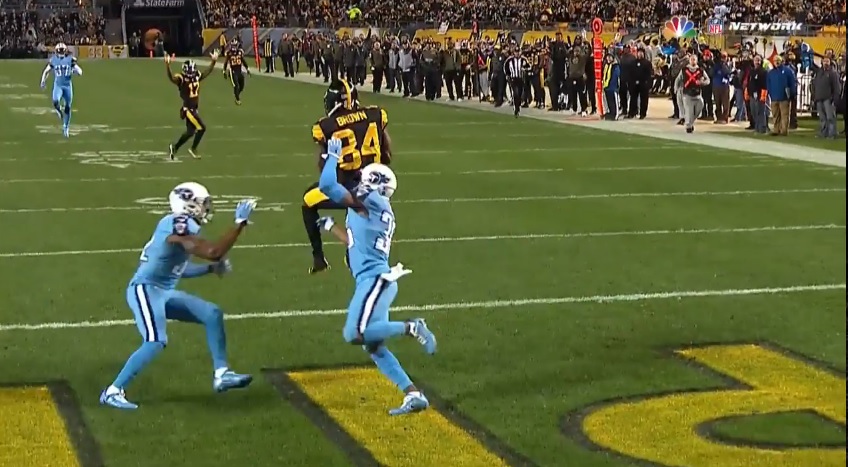 I’ll be honest with you, Steelers’ Nation. I’m not sure if this even qualifies as a controversial statement anymore. Certainly a debatable one, if for anything, because we live in a world that debates over the shape of the Earth. But this isn’t a statement that was necessarily cemented after last night’s victory. Heck, you could’ve made the point before this season even began.

But a ten catch, 144 yard, three touchdown performance is as good a time as any to bring up the point. Admittedly, I wasn’t alive to see John Stallworth and Lynn Swann on a weekly basis. Maybe I’m not the best champion to rank the all-time greats. But Antonio Brown’s greatness is plain for anyone to see, regardless of if you lived through the Steelers’ dynasty.

Brown is the greatest receiver to ever put on a Steelers’ uniform.

No disrespect to the other greats. And they were great. Hines Ward, his smile, his attitude, his blocking. Stallworth’s speed and the numbers he put up in a run-first era. Swann’s grace and ability to come through with a clutch play when it was needed the most.

But Brown? He’s on another level. He’s all of those things (ok…minus the blocking). He’s the best receiver in the league right now. I don’t know what else anyone who remains unconvinced needs. The best route runner. The best work ethic and attention to his craft. And the best when the play breaks down, traits he’s put on display the last two weeks. He could retire today and be a Hall of Famer. Top at his position for years, Brown’s already worthy of a gold jacket.

All this in a guy who doesn’t look the part. A 5’10, 195 pound receiver who ran a 4.57 coming out (though make no mistake, he’s much faster now). He wasn’t blessed with being a 6’3, 220 pound receiver who can make tough catches on just size alone. To put it simply, this isn’t supposed to happen with a guy like him.

Brown has to earn everything he gets. Brown’s ability to get open is rare. His route running, ability to get on DBs’ toes and make them worry about getting beat over the top, only for him to break his route off and catch the ball underneath. Or make a tough catch downfield, just as he did Thursday, a one-on-one grab for a 41 yard score.

Even when he’s well-defended, the body control and hands he displays catch after catch lets him make the play. A helmet catch for anyone else would be otherworldly. For those who watch Brown day-to-day, it’s no surprise.

“Not shocking at all. That’s AB and that’s what he does,” Ramon Foster told Missi Matthews after the game.

He’s going to virtually all the Steelers’ receiving records. Receptions, yards, touchdowns, they’re all going to be his sooner or later. Ditto across the league. Brown is 30 receptions away from his fifth 100 catch season, an NFL record. Steadily moving up the all-time receiving charts, by the end of the year he’ll be in the top 50 in yards and top 40 in receptions.

Sure, he’s been a diva. A bit of a headache. What receiver isn’t? Terrell Owens did pushups in his driveway. Chad Johnson was Ocho Cinco. Push comes to shove, Brown is a professional whose ultimate goal is chasing that Super Bowl.

“Our goal is winning,” he told reporters after the game, deflecting questions about individual performance or how many points the offense racked up. “We always want to play our best but whatever it takes to get the job done. Our business is winning.”

It’s a long list of greatness at receiver. I get it. And even with a long career ahead of him, Brown could legitimately play well into his 30s, I’m calling it. Antonio Brown: the greatest receiver in Steelers’ history.