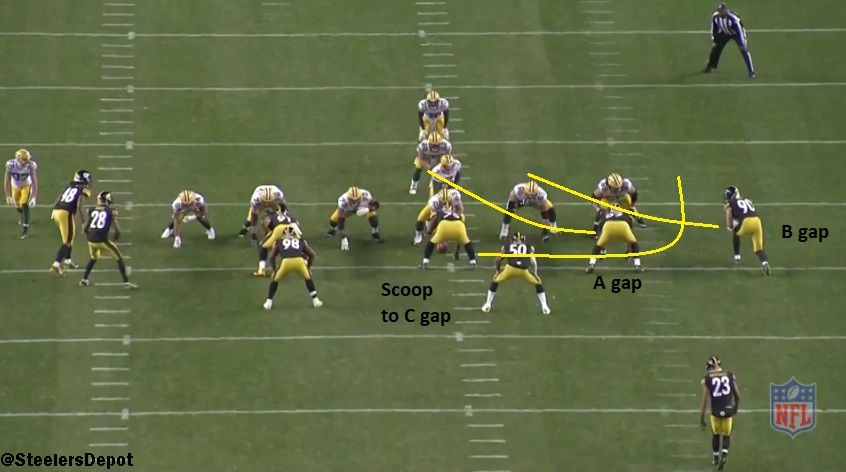 Game notes from the Pittsburgh Steelers’ win over the Green Bay Packers.

– Two things to note on the Bryant end around on the goal line. One, check out the pre-snap attention Antonio Brown got. Yeah, Packers were scared. 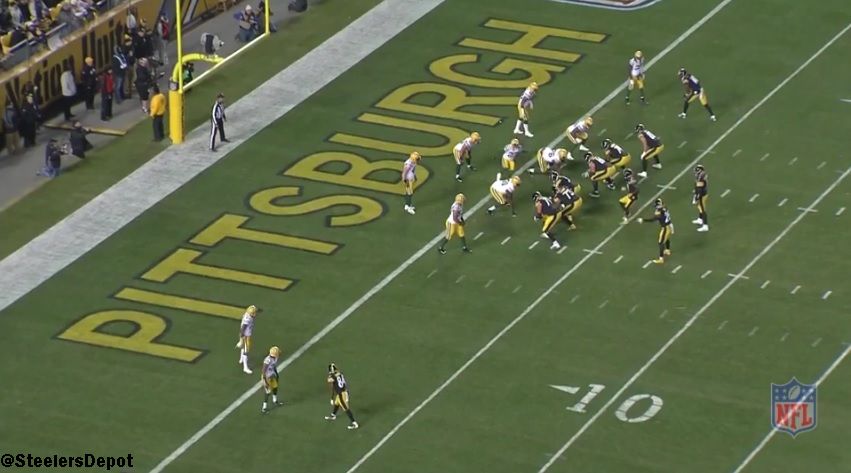 And yeah, looking back, Bryant needs to cut this one upfield. Use his length to fall over the goal line. 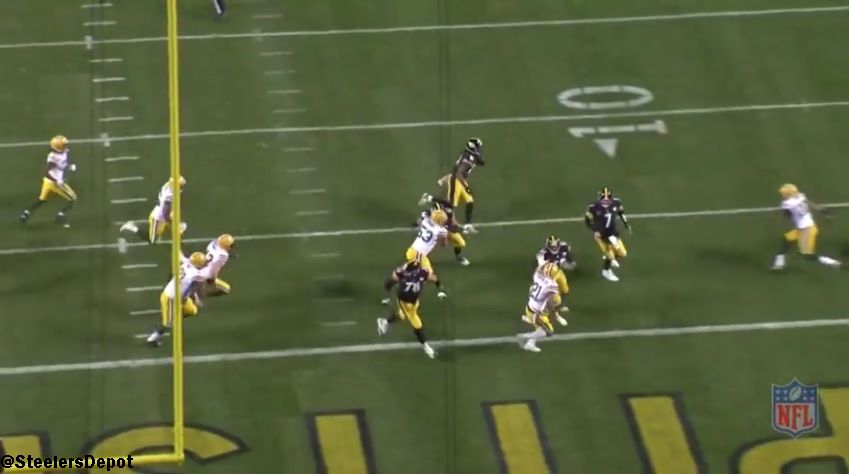 – Nice adjustment by Jesse James on this 3rd and 5 catch. 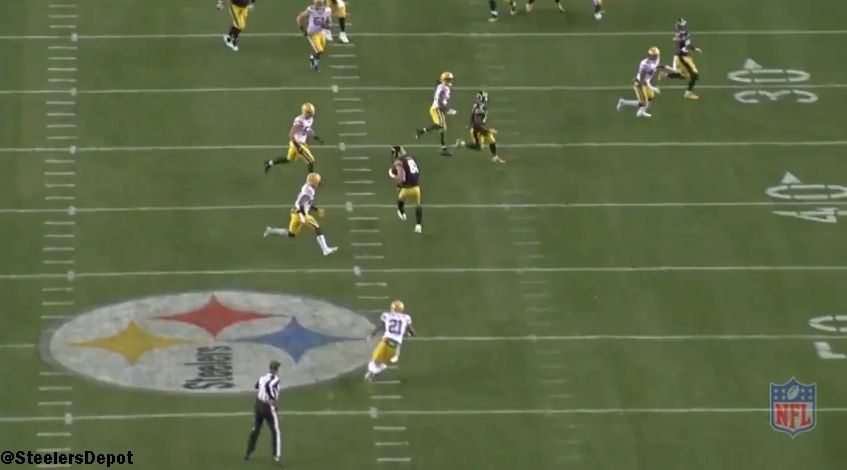 – Mike Hilton continues to play the run at a high level.

Mike Hilton has been so good vs the run. Outside leverage on Nelson (great blocking WR), crosses his face, makes the tackle. 15 run stops is as many as rest of #Steelers CBs combined. pic.twitter.com/vOm2ujbiDy

– Bryant did have the team’s longest kick return of the season, though it wasn’t a terribly difficult play but it also looks like he screwed up his second return. Ran opposite of how his blocks were unfolding and ran into an unblocked man for a poor return. 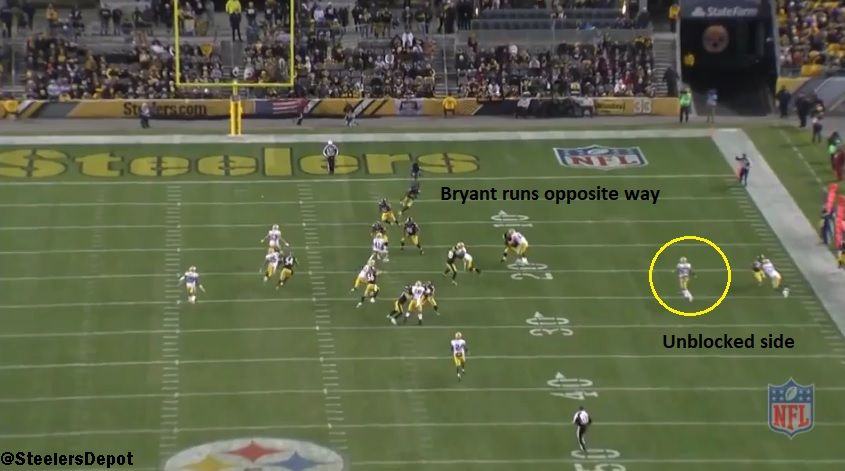 – Punt coverage. Watt-Fort-Canaday-Matakevich-Chick on the lie. Nix/Davis the wings, Golden the upback. Brian Allen and DHB started as gunners.

– Javon Hargrave cocked into the A gap, the LG has leverage to seal him but Hargrave defeats the block, finds the ball, and makes the tackle. Terrific play.

– Heyward with a big third down stop. Stays on his feet on the cut block, makes the tackle. 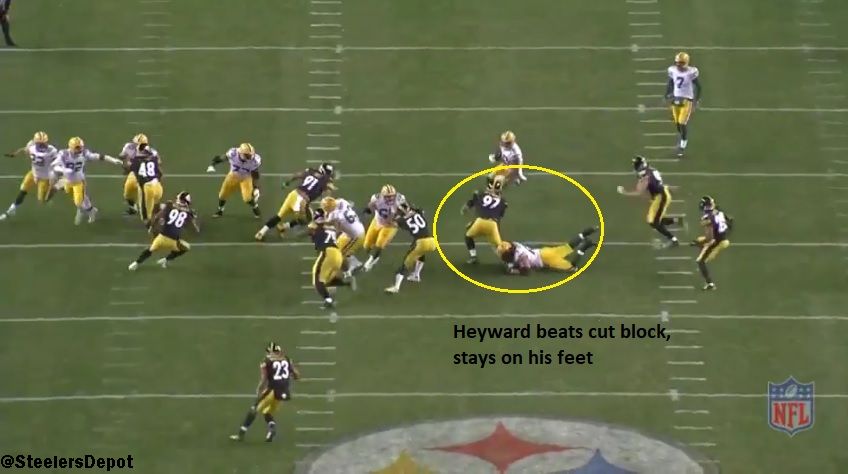 – Looks like Anthony Chickillo might have screwed up here. Free rusher, real close to a block. He and Matakevich end up on the same guy. 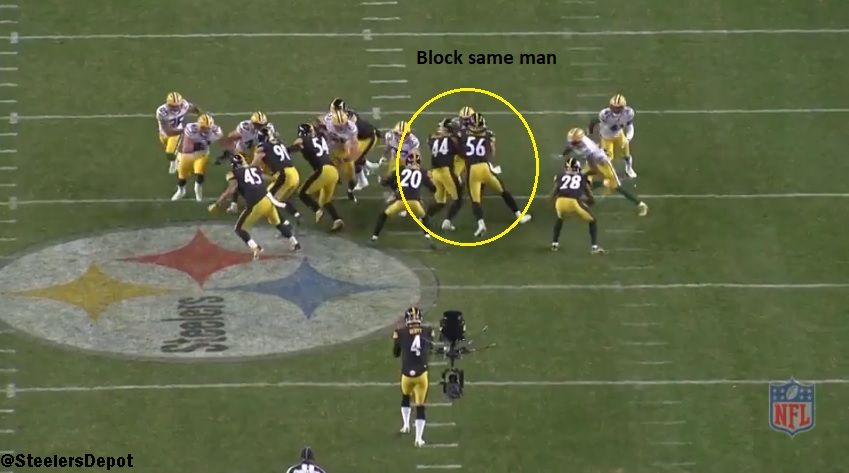 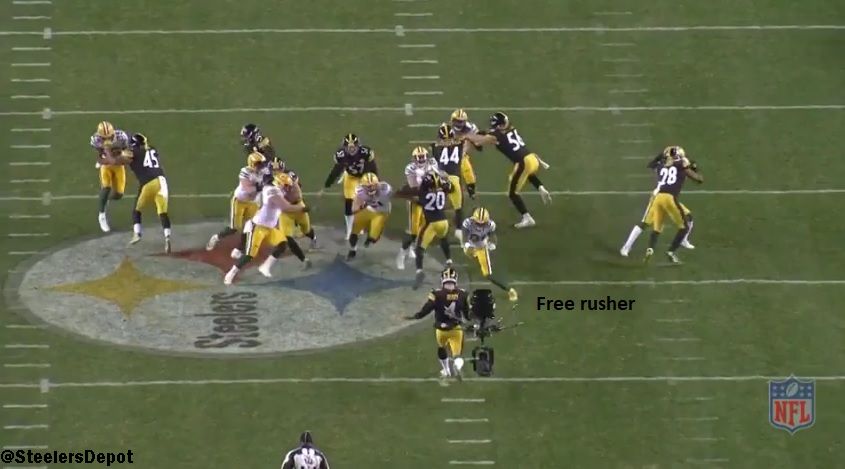 – Steelers used this run stunt pretty often against Green Bay. Hargrave scoops to the C gap, the end crashes to replace in the A. Mixed results. I’m not crazy about it, to be honest. Keep your big man in the middle. 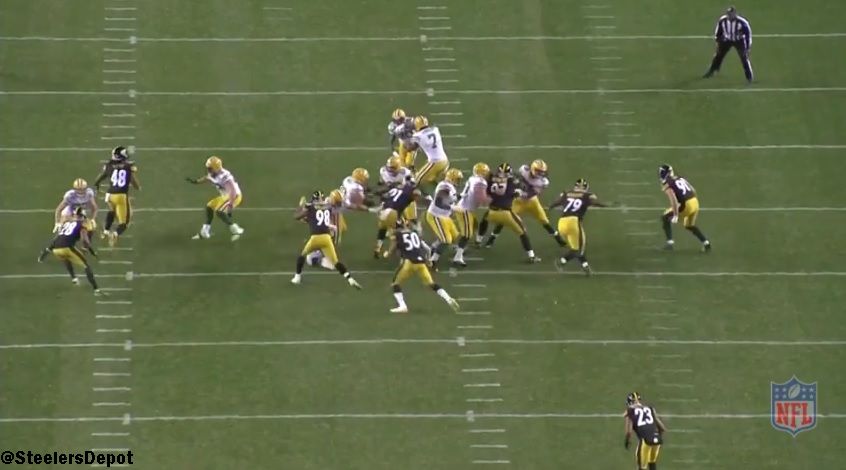 – But good news for Chickillo on special teams. Should’ve had a punt block. Packers forced to hold him to prevent it. 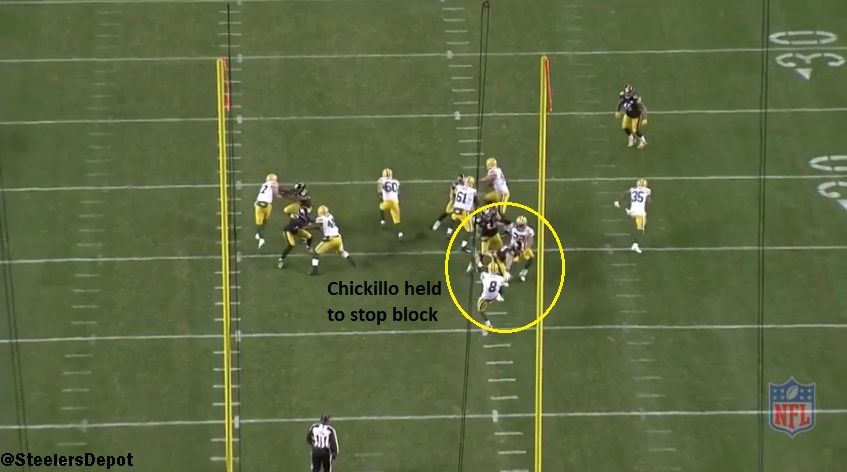 – Critical contain by Golden on this kick return. Kept Trevor Davis inside and made the tackle. 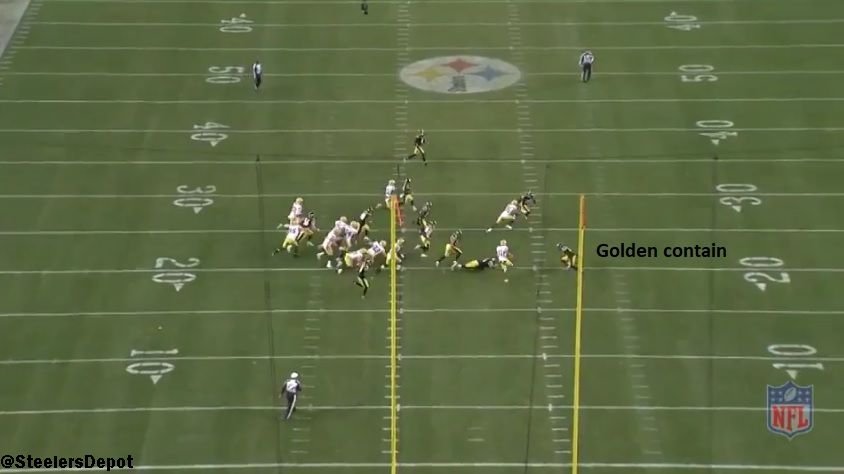 – One of the few bad throws by Ben Roethilsberger on an otherwise great day. Behind on this out route to Martavis Bryant. 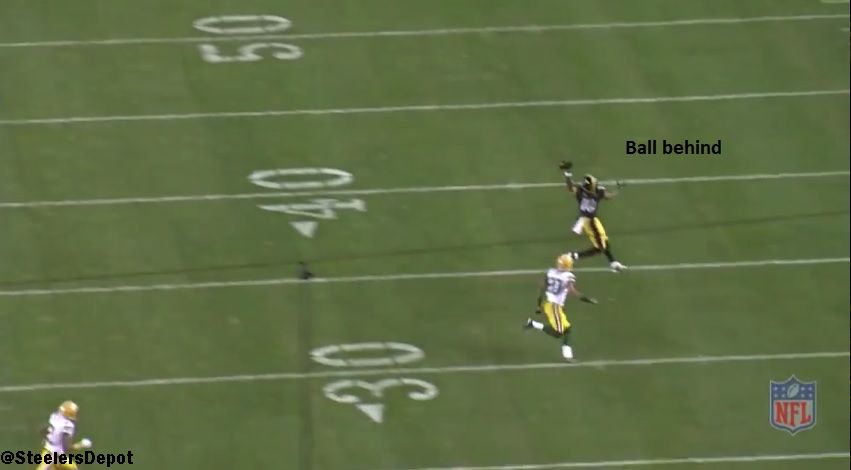 – And one of the few misses in terms of his reads. Could’ve hit Antonio Brown on this mesh on 3rd down. Worked well, picked three guys. Wound up going to Eli Rogers on a corner. Incomplete. 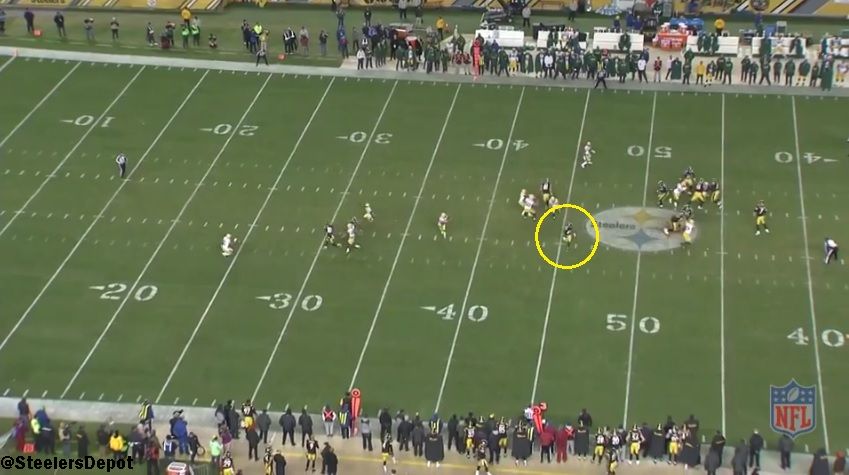 – Stephon Tuitt pressure on the Packers’ final drive may have been enough to get Brett Hundley to drop his eye level and miss the slant coming across to beat zone coverage. Watt cleans it up with a sack. 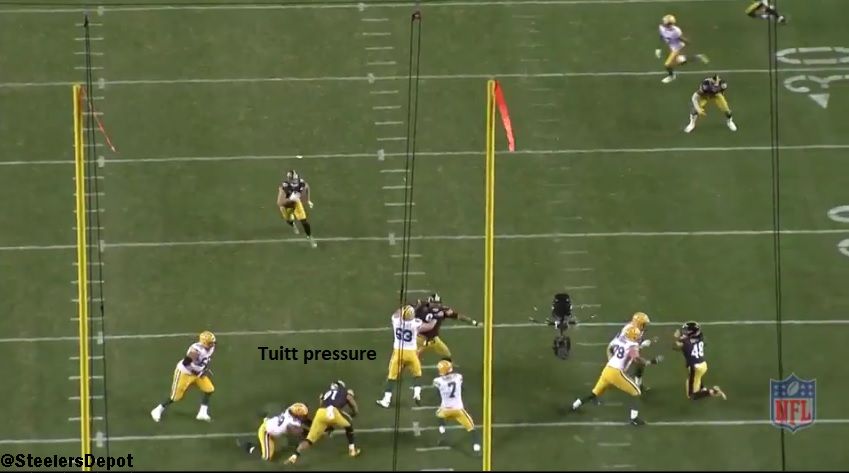