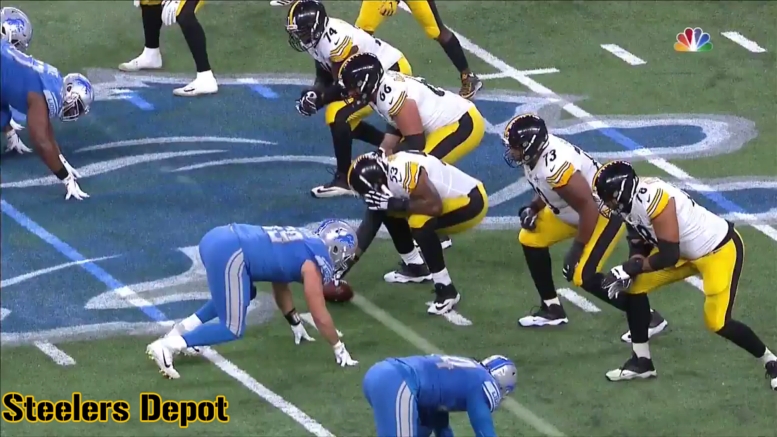 As the season moves further and further along, I can’t help but think about how the offense is only going to go as far as the offensive line is going to allow them to. Le’Veon Bell has not been creating as much of his own offense as he has in the past, and Ben Roethlisberger has required clean pockets or quick deliveries to be effective.

So a key cog in the Pittsburgh Steelers’ machine this year has understandably been their left tackle, Alejandro Villanueva, in his third season, second as a full-time starter, and first as a millionaire. Excusing health, he’s had the most inconsistent year of the group so far.

His Sunday started out well enough, executing pretty basic assignments on the first three plays of the game. But then on play four, he got steamrolled back into the pocket by Ziggy Ansah, back into Ben Roethlisberger, who couldn’t even get a quality pass off to Le’Veon Bell five yards behind the line of scrimmage.

He made up for it two plays later on what should have been a touchdown pass, this time matching Ansah’s punch with one of his own and controlling his leverage better, setting anchor and using his reach as he kept the pocket clean. But poor Eli Rogers dropped the ball.

Later in the quarter, he had a great block on the edge against Ansah on the run, kicking him out of the lane with a strong thrusting one-arm stab to his playside shoulder that took him out of the play. It only ended up being a four-yard gain, but it was a good rep from the big man.

Less so a couple of plays later as he and Ramon Foster struggled to pass off stunting linemen. I’m still not really sure what happened here; it’s almost as though Villanueva expected to block the tackle straight away rather than the guard and deep dropped straight back. Yet he still let the tackle get around him.

Late in the game, on the deep incompletion to Darrius Heyward-Bey in the end zone, Ansah’s freakish athleticism caused the big man some problems. While he shot out to match the rusher’s wide stance well enough, his bend at the top of the arc just displayed what an elite physical talent Ansah could be.

Still, he only fanned at Roethlisberger as he went down and the throw was off. Villanueva has some things to clean up, for sure. He lets too many rushers into his chest, for one thing. He needs to be more consistent, but he’s gotten stronger as the season has gone on.