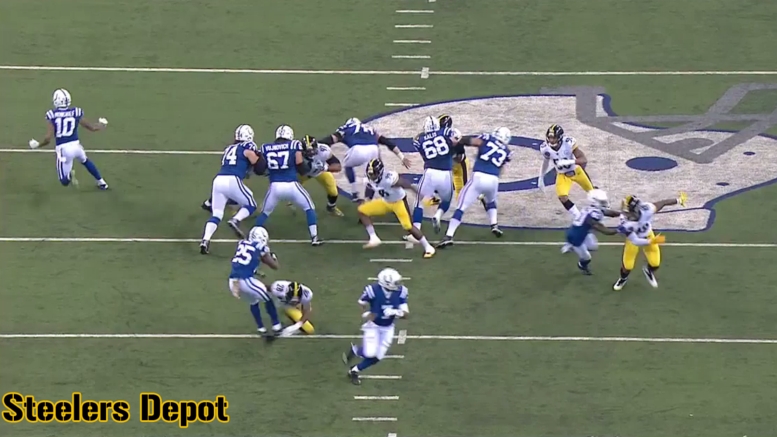 Second-year starting safety Sean Davis has spent the last half of this season making me look stupid for calling him out after the first several games. Since then, the Pittsburgh Steelers’ 2016 second-round pick has stepped up his game and played much better, with greater impact, than he had previously.

While he has not recorded a turnover yet himself, he did record a pass defensed that was intercepted by one of his teammates. He also forced a fumble that was recovered by the offense, and he recorded two passes defensed in the end zone of the play-the-pocket variety that literally directly stole away touchdowns.

He didn’t have any plays individually quite so big as that in Sunday’s game against the Colts—no passes defensed at all, let alone takeaways, but he recorded a season-high eight tackles, a mark that he has now hit three times in nine games this year, bringing him up to 48 tackles on the season.

And yes, those tackles do include stops. He had a big one in the middle of the first quarter, setting up to play the blitz, and did an excellent job of adjusting to a Marlon Mack attempted jump cut. The safety got a grip on the running back’s leg deep in the backfield that prevented him from escaping with balance, going to the ground for a five-yard loss.

As has become standard on this defense, he did miss a tackle, though that’s far from the biggest crime on this play. Ryan Shazier had Mack dead to rights for a big loss in the backfield but missed. Davis’ subsequent miss, after having to avoid a lineman on the ground, was the cherry on top.

Yet he made up for that with another stop on Mack, coming off the edge around the occupied tight end. Mack was running toward his side of the field, but Davis’ speed and angle prevented him from taking more evasive measures as the safety brought him down for no gain.

He has also been playing well on special teams as the right wing on the punt unit since replacing Xavier Grimble there, as he did on this punt shown below, making a very nice tackle to cap off a 56-yard punt that was returned for negative yardage. The returner made a bad decision to take it laterally, but Davis made sure he paid for it.

The Steelers also seem to be blitzing him more again, which is a role that he did effectively during his rookie season, even if he missed a couple of sacks. Here, late in the game, he at least induced a throwaway.

He is not exactly playing himself into the Pro Bowl—he has not shown that dynamic level of play by any means—but Davis has been rounding into form for the Steelers over the course of the past month or so, hopefully a trend that continues.