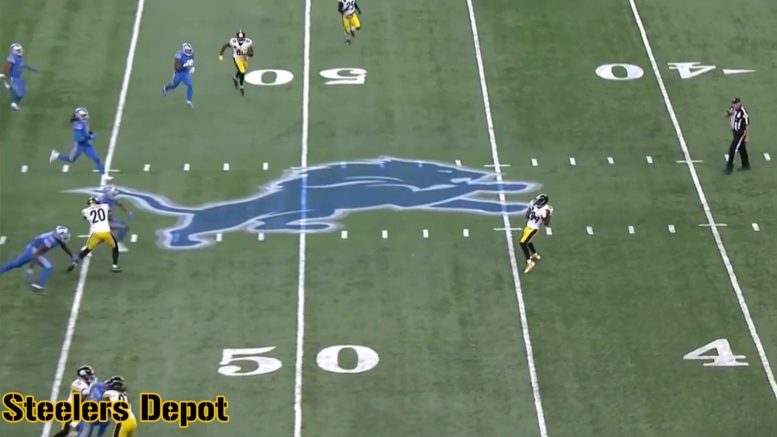 This weeks’ special teams highlight will be a brief one, since it only really played a pretty brief role in the game. Overall, the special teams didn’t play too big of an impact in the Pittsburgh Steelers’ win over the Lions.

I think the biggest story to take out of that game regarding the special teams play is actually something that Alex Kozora already took a look at in the film room earlier this week. It’s something that I might have highlighted here had he already not done so. That is Jesse James as the right wing on the kicking unit.

There were only three punts by the Lions in this one, since they made into the red zone so many times, had two long field goals, and also turned the ball over once, so there is a small sample size, but there is more than enough to discuss anyway.

The first punt came with four minutes to go in the first quarter. The Lions were backed up to their own 10, and Sam Martin got off a 45-yard kick that was fair caught at the Steelers’ 45 by Antonio Brown. Solid punt, and good field position. But this should have been more.

The Steelers used vice jammers on both gunners, which indicates that wanted a return. But Brown called for a fair catch before anybody was within 20 yards of him, and he had room to run when he fielded the punt. It’s a bit of an injustice to the jammers, who on this occasion were J.J. Wilcox and Joe Haden on the left (interestingly, as that is where Haden started the season, but Wilcox had hardly played jammer) with Artie Burns and Darrius Heyward-Bey on the other side.

Later in the half, in the waning seconds, the Steeler used the same vice jammers again, except with Coty Sensabaugh replacing Haden. Off a 55-yard punt, Brown, I’m hoping, thought the punt was going out of bounds, but it bounced a half a yard inbounds inside the 14, bouncing forward for two yards to the 16. Again, if he were fielding this, he would have had room for a return.

The Steelers got a break on the Lions’ third and final punt when Martin shanked it off the side of his foot. It crossed out of bounds at the Lions’ 48 for a net of 19. Fortunately so, as Haden was beaten as the right jammer. I don’t know if I’ve just been missing this, but this is the first time I’ve noticed Haden back in this role, at least for more than one snap, since the opener.

To summarize, when the Steelers used vice jammers, the protection gave the returner room to run that he passed up. When they didn’t use vice jammers, they were the beneficiary of a shanked punt.