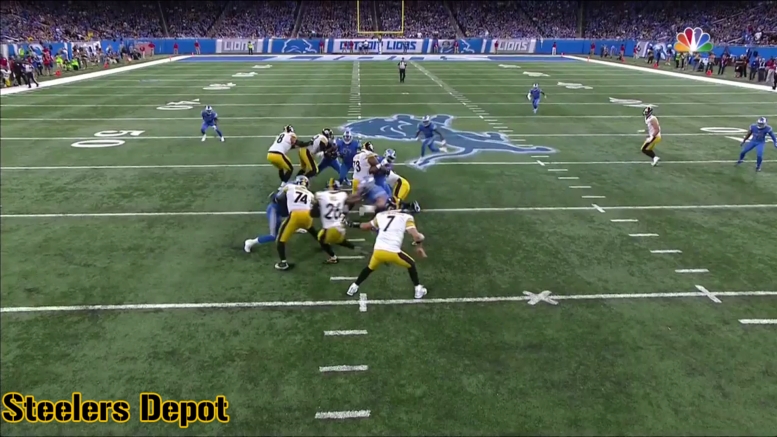 I have to admit that in a weird way I am appreciative of the fact that Marcus Gilbert’s absence for the bulk of the season has given me an opportunity to really look long and hard at fourth-year offensive lineman Chris Hubbard, who has been the Pittsburgh Steelers’ primary man at right tackle this year because of that.

Ideally, however, Gilbert will be back after the bye week, which means that Sunday should be the last game Hubbard needs to start—at least at right tackle; he could still make a ‘start’ at tight end. So in something of a fond farewell, I give present to you a film study of hopefully his last start at right tackle.

It was, I think, a solid overall game, an ‘above the line’ showing for a replacement starter, something that he has consistently delivered over eight games in the past year and a half.

He showed good leverage and drive in turning and sealing end Anthony Zettel on the second play of the game, for example, helping to open a lane for Le’Veon Bell to pick up seven yards. He followed that up on the next play (not featured) with a nice reach block after Zettel kicked inside right next to the tackle.

Skipping ahead to the start of the second quarter, it was Hubbard and Zettel again, this time in a passing set. Following an initial chip from Jesse James, Zettel got a good initial drive on the lineman before he was able to set his base right at the quarterback’s feet.

Zettel, again making life difficult for Hubbard by kicking inside right in the B Gap, this time was able to find success, as he carried Hubbard right across the formation and in Bell’s way on a run that ended up going for a loss of one.

Midway through the quarter, the Lions stuck Ziggy Ansah on the right side, but they also stunted a blitzer around wide right end all the way from over center pre-snap. It was a difficult read that Hubbard caught latte, but he enabled Ben Roethlisberger to get the throw off to Justin Hunter for the third-down conversion.

Early in the second half, facing Cornelius Washington at left end, Hubbard was admittedly pretty well-handled on this rep, bullied back into the pocket on the bull rush, helping influence a low throw into the end zone.

Later in the quarter, the Lions flipped Ansah back to the left side over Hubbard with the Steelers backed up to the three. But the right tackle held up, and the result was a 97-yard touchdown.

Finally, on a run midway through the fourth, facing Ansah once again, the lineman was unable to turn the corner on the end to seal him upfield on a run around right end. Ansah was able to scrape off the block and tackle Bell for a loss of two.

the past bunch of games for Hubbard starting at right tackle has been a good experience for him. Nobody expected him to play like a Pro Bowler—nobody should have—and he didn’t, but I thought he more than held his own.