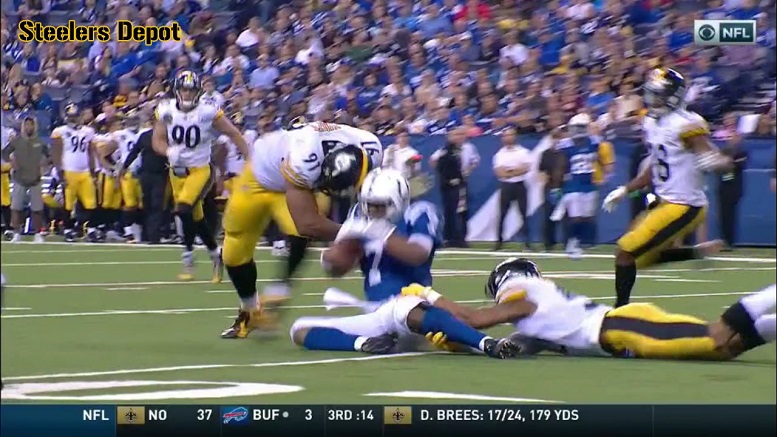 Indianapolis Colts quarterback Jacoby Brissett is currently in concussion protocol as a result of a late third quarter hit from Pittsburgh Steelers defensive end Stephon Tuitt during Sunday’s game. According to Kevin Bowen‏ of 1070 The Fan, the Colts are curious to know why Tuitt wasn’t penalized for his hit on Brissett.

Pagano says the Colts will send in the hit that originally sent Jacoby Brissett to the medical tent to the NFL.

Stephon Tuitt was not flagged for what looked to be a helmet-to-helmet hit.

Bowen reports that the Colts head coach Chuck Pagano said Monday he will send notice of the play to the NFL for explanation.

According to Charean Williams of Pro Football Talk, Tuitt can expect to be fined for his hit on Brissett even though referee Clete Blakeman and his crew didn’t throw a flag on that play. With that said, a slowed down replay of Tuitt’s hit on Brissett that followed the original tackle by Steelers linebacker Ryan Shazier reveals that the defensive end may not have made significant, if any, helmet-to-helmet contact with the Colts quarterback. Instead, it looks like Tuitt’s left hand and arm might be the main reason why Brissett immediately grabbed the back of his head.

While Brissett ultimately did not miss a play after suffering the hit, he did develop concussion-like symptoms after the game and was immediately placed in concussion protocol.

We should know by the end of the week if Tuitt was fined for this hit.