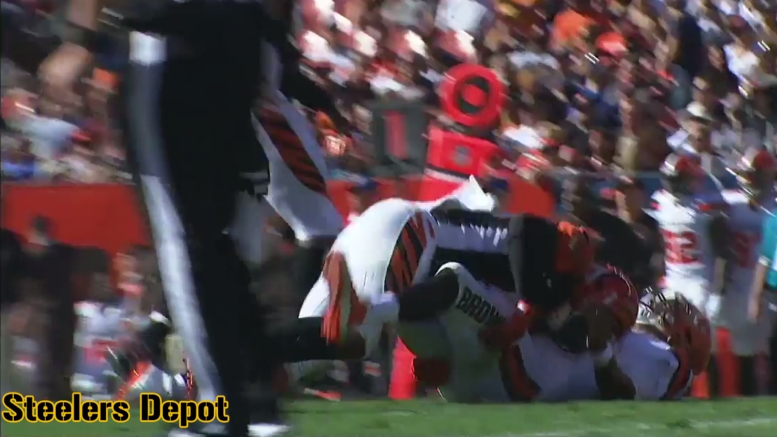 It didn’t take Vontaze Burfict long to get his first personal foul penalty. In the first game back for the Cincinnati Bengals middle linebacker after serving a three-game suspension as a recidivist defender for a hit he put on a defenseless receiver in the preseason, the veteran earned himself a roughing the passer penalty in the fourth quarter of the Bengals’ win over the Browns Sunday that negated an interception.

But was it deserved? That is what Cincinnati is wondering, though they, of course, are the least impartial of observers. Head Coach Marvin Lewis has habitually gone to bat in defending virtually every one of his player’s penalties over the years, which have cost him probably close to $1 million by now in fines and lost wages from suspensions.

On the play in question, Burfict was sent on a blitz through the leftside B Gap, unblocked with another blitzer occupying the running back, staying in for protection, so he was unabated to the quarterback. DeShone Kizer got the throw off before Burfict reached him, but it was well within the one-step margin.

So why did he get penalized?

It’s because he drove through the quarterback and into the ground, which, as I will show, quoting the 2017 NFL Rulebook, is roughing the passer. In Rule 12, Article 9, subsection b, we clearly find the instance of violation that Burfict committed.

A rushing defender is prohibited from committing such intimidating and punishing acts as “stuffing” a passer into the ground or unnecessarily wrestling or driving him down after the passer has thrown the ball, even if the rusher makes his initial contact with the passer within the one-step limitation provided for in (a) above. When tackling a passer who is in a defenseless posture (e.g., during or just after throwing a pass), a defensive player must not unnecessarily or violently throw him down and land on top of him with all or most of the defender’s weight. Instead, the defensive player must strive to wrap up the passer with the defensive player’s arms and not land on the passer with all or most of his body weight.

The bolded section is my highlight, and in my opinion makes it unambiguous that Burfict committed a foul on the play, as the replay enclosed in this article shows. Burfict clearly unnecessarily drove Kizer down after he threw the ball, even though the initial contact was within the one-step limitation. He also unnecessarily landed on top of the quarterback with most of his body weight.

Much to the Bengals’ perplexity, the rule book seems to clearly legislate against what Burfict did on this play, and to the chagrin of the team’s beat writers and coaching staff, he is not simply a ‘victim of his own perception’.

That is not to say that this particular play is malicious and indicative of intentionally dangerous play, but it is clearly in violation of the rule as it is written, and not just because it was Burfict. Ryan Shazier, Cameron Heyward, and T.J. Watt have had as or even more questionable roughing penalties go against them this year.