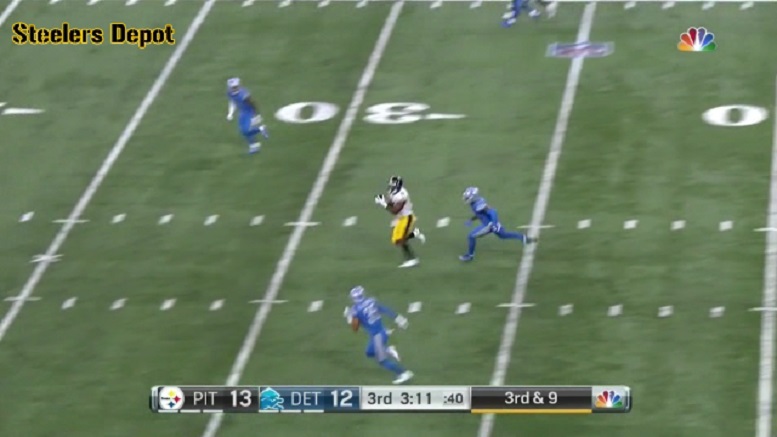 Half way through the 2017 season, Pittsburgh Steelers rookie wide receiver JuJu Smith-Schuster has been able to make quite the impression on both the coaching staff and fans everywhere. Through the first 7 weeks of the season, he had collected 17 receptions for 231 yards and 3 touchdowns. While Steelers fans have grown to love Smith-Schuster for his performance, whether it comes to receiving, blocking, or even end zone celebrations, the rest of the world was formally introduced to him on Sunday night. In what Steelers fans hope to be a great career, October 29th, 2017 will serve as the official coming out party for Smith-Schuster as he finished the game with 7 receptions for 193 yards and one long 97-yard touchdown to help Pittsburgh secure a 20-15 road victory against the Detroit Lions.

What made Smith-Schuster’s touchdown even more crucial and back-breaking for the Lions was the fact that it was setup by a huge goal line stand by the Steelers defense on 4th down just less than a minute earlier. The Lions, down 13-12 attempted to convert a 4th and goal from the 1 yard line and were stopped short thanks to a great pass rush and sack by defensive lineman Tyson Alualu. The Steelers chose to rush four on the play and were able to get pressure with outside linebacker Bud Dupree and defensive lineman Javon Hargrave. The pressure forced Lions quarterback Matthew Stafford up into the pocket and right into the arms of Alualu.

After a short 3-yard run by running back Le’Veon Bell and a holding call on fullback Roosevelt Nix, the Steelers were faced with a 2nd and 9 from the 3-yard line and decided to get aggressive with the play calling. Quarterback Ben Roethlisberger attempted to hit a wide open Jesse James down the middle of the field but the throw was off target and the Steelers were now faced with a 3rd and 9 deep in their own territory. The next play is where lighting would strike and Roethlisberger would hit Smith-Schuster for a 97 yard touchdown that would end up being the game winner. Roethlisberger noticed something pre-snap with the defense and signaled to Smith-Schuster in the slot that he may have 1 on 1 coverage. Smith-Schuster was able to beat his man up the seam in what looked to be two-man coverage and catch a perfect pass in stride allowing him to outrun the remaining three Lions defenders chasing him. The touchdown will go in the Steelers record books but more important on Sunday, it all but sealed the victory for the Steelers.

The Steelers head into their bye week with a 6-2 record and a two-game lead over the Baltimore Ravens in the AFC North. With the bye week, the Steelers will hope to get back a couple starters from injury including defensive lineman Stephen Tuitt, and tackle Marcus Gilbert as they head into their Week 10 game against the 2-6 Indianapolis Colts. The Steelers will close out the second half of the season with five home games.