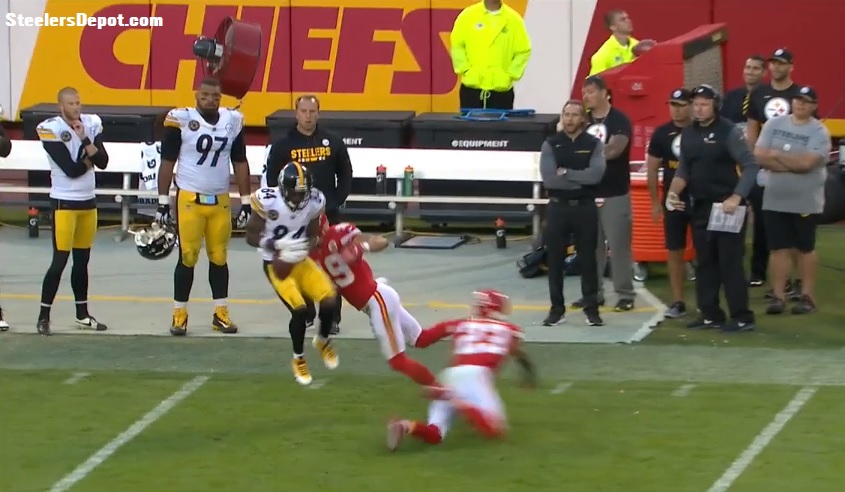 Brown is quick, but not the fastest wide receiver in the league. Also, he certainly is nowhere near the size of the typical #1 wide receiver that you see in players such as Julio Jones, Mike Evans, A.J Green, or Jordy Nelson.  What Brown has done to make up for that over the course of his career is perfecting the things that he does have control over.  He is widely considered around the league as being one of the best when it comes to running routes, catching the ball, and having that knack of making the big play whenever his team needs it.  That is what Steelers fans have grown to love about Brown over the years and there is no better example of that than his 51 yard circus touchdown catch against the Kansas City Chiefs on Sunday.

In a game that the Steelers led most of the way and were in control of throughout, there was still that all too familiar feeling of struggling to close it out and securing the win. Earlier in the 4th quarter with just under 13 minutes remaining, the Chiefs took a risk going for it on 4th down deep in Steelers territory but were unsuccessful thanks to the Pittsburgh pass rush and a nice pass break up by safety Sean Davis. That was a huge turning point in the game but the Steelers were never able to capitalize and use it to close out the victory. Fast forward to about 3 and a half minutes remaining in the game and Steelers only held a 12-10 lead and needed a big play from someone on offense.

On a 3rd and 2 from their own 49 yard line Steelers quarterback Ben Roethlisberger attempted a pass down the left sideline about 15 yards to Brown that was tipped by Chiefs cornerback Phillip Gaines.  Roethlisberger had attempted to fit the pass in between Gaines and safety Daniel Sorensen but was unsuccessful as the cornerback was able to get his hand (and helmet) on the ball causing it to redirect.    Sorensen was closing in from down field and was looking to hit Brown but was unable as the wide receiver halted his momentum and grabbed ball with one hand and took it the distance as Chiefs cornerback Terrance Mitchell chased but could not catch him.

With the touchdown, the Steelers took a 19-10 lead which was huge as the Chiefs, now being down two possessions, were forced to be aggressive the rest of the game. The Chiefs were able to add a field goal to close the lead to 19-13 but were never able to get the passing game going to ultimately complete the comeback as the Steelers pass rush took over on the final possession of the game.

The Steelers improve to 4-2 and now have sole possession of first place in the AFC North.  In Week 7 the Steelers will host the Cincinnati Bengals (2-3) at 4:25 pm EST.   The Bengals will be coming off of a bye week and are 5-8-1 in those games under head coach Marvin Lewis.