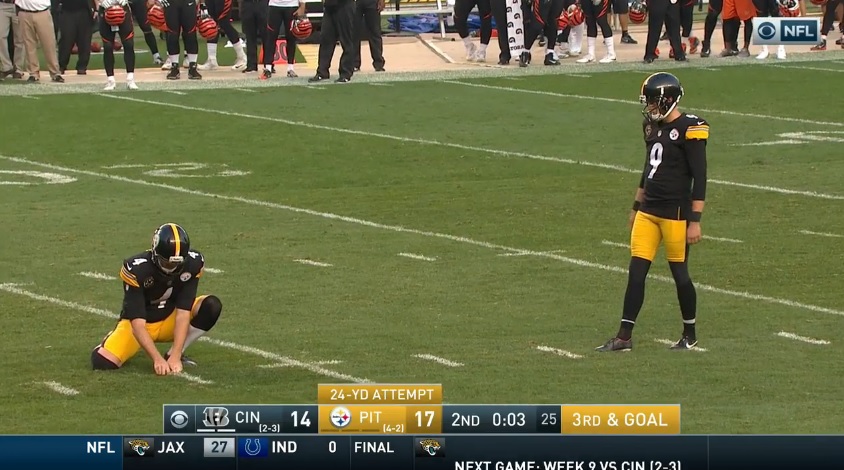 – Specific score stat. First time the Pittsburgh Steelers have scored exactly 29 points in a game since 2005, a 29-24 win over the Buffalo Bills. That was the “backups” game in their 15-1 season. Willie Parker’s coming out party.

– In the Mike Tomlin era, the Steelers have only run the ball more than the 43 times they did today once – last year against Buffalo (45).

– Believe it or not, Le’Veon Bell’s 58 yards is the first time he’s had more than 50 in a game since December 11th of last year.

– It’s been nearly three years since Joe Haden recorded an interception in a victory. The last came on November 23rd, 2014, a 26-24 over the Atlanta Falcons.

– Sure you saw already but the Steelers were a whopping 0/4 on 3rd/4th and 1. Not third and short. Third and one.

– And I’m sure you saw the Steelers have given up a TD on all five goal line snaps this year.

– Last week, the Steelers allowed just 12 first downs to the Kansas City Chiefs. This week, just 11 to Cincinnati. First time they’ve done that in back-to-back weeks since Weeks 14-15 in 2006 against the Cleveland Browns and Carolina Panthers.

– Second time in Sean Davis’ career he’s forced a fumble and picked off a pass in the same game. Other occasion was his senior year at Maryland, a win over South Florida. Two picks, FF on the game. One of each today.

– Chris Boswell ties the Steelers record for games going 5/5 (or better) on field goals. Second of his career (also last year over Cincinnati). Jeff Reed, Kris Brown, and Gary Anderson each have two.

Boswell is a perfect 21/21 in his career against the Bengals.