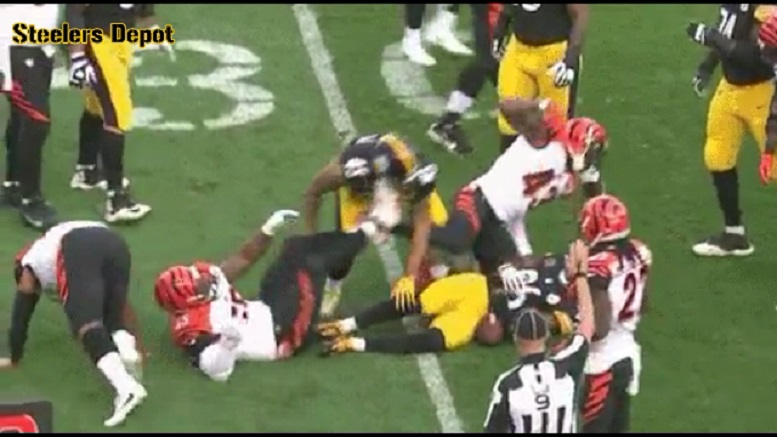 While his early-Sunday game kick to the head of Pittsburgh Steelers fullback Roosevelt Nix appeared to be dirty to some fans of the team, as well as to running back Le’Veon Bell, Cincinnati Bengals linebacker Vontaze Burfict will reportedly not be suspended for it.

According to Katherine Terrell‏ of ESPN.com, the league will not suspend Burfict for his kick to Nix’s head I the first quarter of Sunday’s game at Heinz Field. However, the Bengals linebacker still might be fined, according to her report.

Bell talked about Burfict’s kick to Nix’s head during his post-game press conference and has since blasted the Bengals linebacker more on his Twitter account.

“Dude gotta go, man,” Bell posted on Twitter. “That’s not football at all.” Bell later added, “It’s unbelievable the league is just condoning this activity, But if Rosie reacts, Rosie would be the one that would get into trouble.”

Bengals head coach Marvin Lewis has since said that he believes Burfict’s kick to Nix’s head is being “overblown.”

“I think the player pushes Vontaze back after the play … the official is right there and warned (Nix) to not do that,” Lewis said.

Burfict ended up get a face full of Nix the rest of Sunday’s game and the Steelers fullback will just have to take that as some sort of consolation and retribution.

The Steelers and Bengals will face each other again in Week 13 and that game will take place in Cincinnati. We’ll see if Burfict isn’t serving another suspension by then.

man dude gotta go man…that’s not football AT ALL!! https://t.co/IFbNZPZtWR

it’s unbelievable the league is just condoning this activity…but if Rosie reacts, Rosie would be the one that would get into trouble https://t.co/IFbNZPZtWR

According to the league, there will be no suspension for Vontaze Burfict following his kick in the direction of a Steelers player