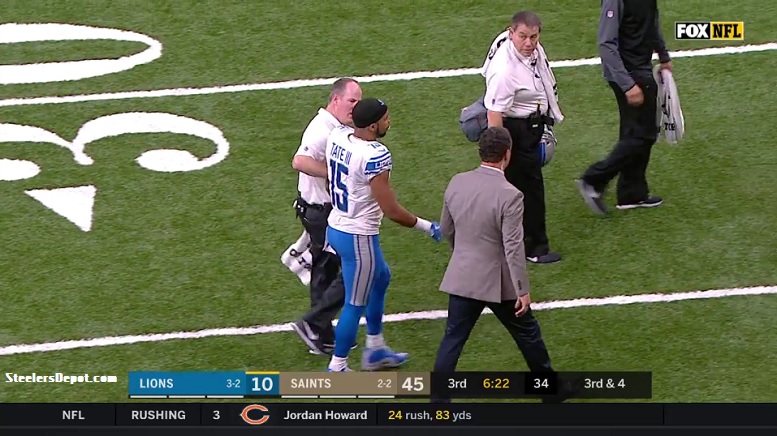 Even though he ended the week listed as questionable on his team’s final injury report with a shoulder injury, Detroit Lions wide receiver Golden Tate is reportedly still expected to play Sunday night against the Pittsburgh Steelers.

According to Adam Schefter of ESPN, Tate, who suffered a sprained AC joint during the Lions Week 6 loss to the New Orleans Saints, plans to play Sunday night against the Steelers.

Lions WR Golden Tate, listed as questionable for Sunday night vs Steelers due to shoulder injury, plans to play, per source.

Tate enters Week 8 as the Lions team leader in both receptions (36) and receiving yardage (363). He has scored two touchdowns on the season as well. 13 of Tate’s receptions this season have come on third down plays.

This past week, Tate was listed as only practicing on a limited basis on Wednesday, Thursday and Friday and that prompted the Lions to list him as questionable on their final injury report of the week.

The Steelers usually keep cornerbacks Joe Haden and Artie Burns on their respective sides of the field so don’t expect Tate to be followed around Sunday night should he indeed wind up playing.

While the Lions look to have Tate Sunday night, they won’t have rookie wide receiver Kenny Golladay as he’s already been ruled out for the contest with a hamstring injury.