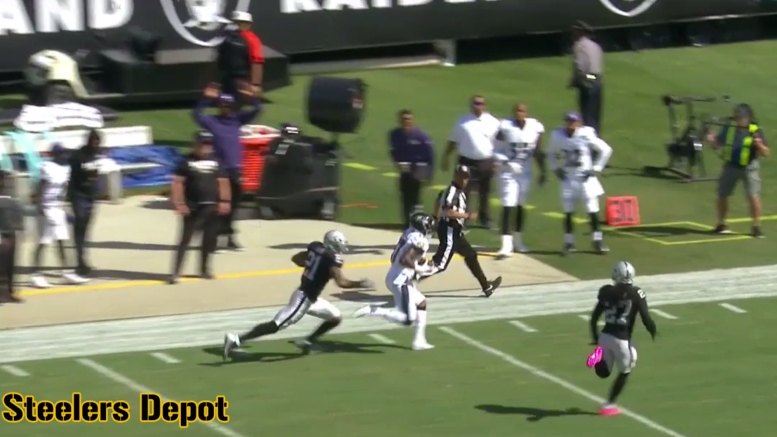 On the same afternoon on which it seemed that the Pittsburgh Steelers’ passing offense had fallen apart, that of the Baltimore Ravens’ finally showed some signs of life, and that was particularly prevalent due to the sudden presence of the previously missing deep passing game from quarterback Joe Flacco.

It was Steelers alumnus Mike Wallace, a former Pro Bowler at wide receiver in Pittsburgh, who was both the catalyst and the beneficiary, as the two connected on not one, but two passes of 50 yards or more in the first half alone. He ended up with just three catches, but for 133 yards, which is actually the third-most in his career, and just his fourth 100-yard game over the past handful of years.

The hookups were crucial for both Wallace and Flacco, neither of whom had played well at all this year. Coming into this game, for example, Wallace had just 76 receiving yards on the season over the span of four games.

And as for Flacco, while he did not throw a touchdown, he also avoided an interception, and he was able to be efficient, averaging 8.5 yards per pass attempt, and completing 19 of his 26 pass attempts while avoiding any sacks after taking four last week and throwing two interceptions.

On the season, he is still averaging just 5.7 yards per pass attempt, and his still has fewer touchdowns (four) than interceptions (six). Nobody would mistake him at the moment for a Pro Bowler. But the 30-17 victory was at least a pulse for the anemic Ravens offense.

They still went just two for five in the red zone, settling for field goals three times and being the beneficiary of a fumble that was returned for a touchdown. This is by no means a juggernaut of an offense.

But the Ravens don’t need them to be, not while the defense is playing effectively, and they have been without Brandon Williams, their stout nose tackle, for the past three weeks. All they really need out of the offense on any given week is a basic level of competence, which has been difficult.

It’s far too early to suggest that this game in Oakland represents some sort of turning point that will yield for Baltimore bigger and better things on the offensive side of the ball. They could easily turn in a clunker hosting Chicago next week.

But for a week at least, Flacco has the media off his back, and he doesn’t have to come out and defend himself, or, alternatively, say that he sucks. And they ended a two-game losing skid while drawing back even in terms of win-loss record with the Pittsburgh Steelers. They couldn’t have asked for much more from the day.