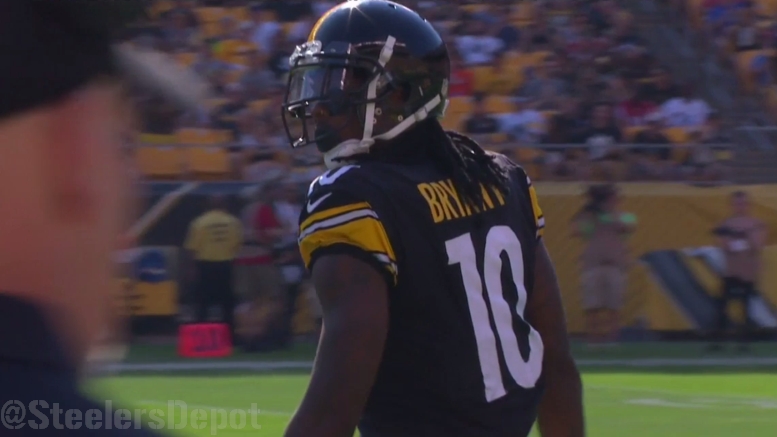 Ten is an awfully important number for Martavis Bryant. It’s the one he wears on the football field each Sunday with the Pittsburgh Steelers. Tenth grade is when he committed to Clemson. But ten also has a unique connection. It’s how old he was when colleges began scout him.

Bryant sat down with Steelers.com’s Missi Matthews in an interview posted to the team site yesterday. There wasn’t a whole lot going on in this video but one interesting quote came when Bryant said how his college football career began. Which, by the way, was at running back, where he played until he was 14.

“It’s funny because once I was ten, I rushed for over 30 touchdowns and 2000 yards. I actually had a Clemson coach come watch me play in the Pee Wee Championship game. That was pretty cool. That was when I figured out I could start doing something with this. I could make something out of my life playing football.”

The craze of kids, literally, kids, getting scholarship offers and interest from powerhouses is nearly standard these days. Illinois offered a 10 year old a scholly back in June.

And a month later, Nevada sent one out to a nine year old.

I’m not exactly clued into the high school/college recruiting scene but Bryant was ten years old in 2001, an era where I’m guessing those kind of things happened far less often.

That interest evidently stuck with him, and the school, as Clemson was the first campusl to offer him once Bryant got into high school. The star receiver quickly accepted.

I’m not as well-versed in being able to explain a controversial issue like Matthew Marczi but there’s pros and cons to recruiting so young. Obviously, the initial feeling of a kid getting recruited by mega powerhouses is a little unsettling, especially with all the sleazeball tactics that have come to light in college basketball. It’s a childhood actor vibe that places too much pressure too early.

But like Bryant says, it tells some players they have a real chance to go to college, to be a success, and can serve as motivation to stay on the straight and narrow (of course, Bryant hasn’t always done that in his life but you get the point).

Ultimately, this is pretty meaningless for Bryant’s career. But it was an interesting fact in his life and how young the recruiting process starts.