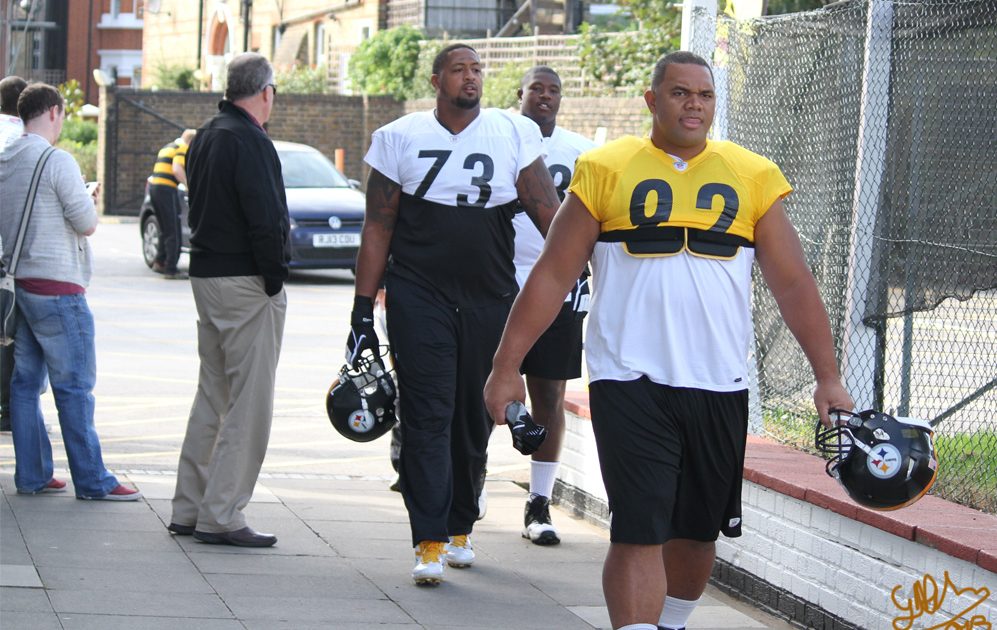 Bringing you another Pittsburgh Steelers’ interview courtesy of our good friend Ron Lippock of the Pittsburgh Sports Daily Bulletin. Today, Ron talks to former Steelers’ nose tackle Hebron Fangupo, who played for the team from 2012 to 2013. They talk about how he came to the Steelers, the time he invited Troy Polamalu to his house, and some of the best stories about defensive line coach John Mitchell.

First, tell us about your job as a Defensive Line coach at Snow College. How did you start your career as a coach?

Well I always knew I wanted to be a coach. Even before I stopped playing I was pursuing a career as a coach. I asked Coach Tomlin, LeBeau and all those guys advice all the time and wrote notes religiously.

I was always surrounded by good coaches and players. John Mitchell – there was a method to his madness. He was always mad. But I learned a lot from him. How to get players to match a coach’s personality – the toughness that he expected. You knew he meant business. But man, if you give the guy a glass of wine, he’ll sing for you.

Any specific lessons help you most?

I’d use Tomlin’s teachings – it always stuck with me “The first step to getting better is showing up!”

When my career was done, I adopted that hard-nosed, gritty, tough, no-mercy Steelers style. There were times when I wondered why John Mitchell was so mean. But now with my own group of players, when I’m preparing playbooks and take the time to write down my philosophies and they’re not studied – that’s really frustrating.

Now I know why he would get so mad. I never really had a chance to thank him – the impact he had on my life. He was a tough coach – but he taught me how to be tough and fair. How to get players to show loyalty. When I got there he pointed out players to me – Keisel, Ziggy Hood, Heyward…he told me there was no way I could beat those guys out. That pushed us harder – and it comforted me too to know that if I give him my all he’d have my back. I want my players to think the same thing about me as a coach – I want to be their John Mitchell.

Tell me how you found your way to Pittsburgh after starting in the NFL as an undrafted free agent?

I was playing in Seattle – after seven weeks of hard work I was signed up to the active roster for two-three weeks. And I love those active checks! But Pete Carroll told me that while he loved my hard work he had to cut me because they had a need for linebackers on special teams. He said he really hoped no one would pick me up on waivers – I’d be a steal. I was a hard worker – no one could take that from me.

Twenty-four hours have to pass before someone could pick you up on waivers, and I remember texting the general manager with two hours left that it looked like I was going to be signed back to the practice squad and come back to Seattle. But right after that I got a call from Pittsburgh saying they got me!

I remember the first guy I spoke to when I first got there was John Mitchell – of course. He asked me to tell him something about myself. I told him I work hard. He told me, “You don’t know the fuck about hard work!”

When I came back to camp, I remember getting ready for the conditioning test. My good friend was there – Alameda Ta’amu- he was another defensive lineman. We were competing for a spot – I made sure I did well enough to stand out. I ran the one-hundred yards and ran the one-hundred back again. I wanted to be the first guy standing around, waiting for the others to finish.

McCullers was there – he was a freak of nature. I knew by his size I was in trouble. I’m really happy for his success so far – he was such a good guy, When you got him mad, it was over. The funny thing is, I’m a farmer. I would always do everything early in the morning. I would get to the facility and work out at five and was done by the time everyone else got there at eight. I think some were suspect whether I was really working out.

Any fun stories to share of your time in Pittsburgh?

Oh yeah. Troy {Polamalu} truly had a fat man’s heart for roasted pig. I invited him over to my apartment once for roasted pig – a woman in the elevator recognized him and literally just froze solid. I think she almost passed out! We got to my apartment and my mom had no idea who he was. My wife explained to her – he was a superstar player – the Head and Shoulders guy.

Well, my mom tells me to get him a bowl of water, soap, and a towel. He shouldn’t have to get up to wash his hands! Then he pulled out a picture of his kids. They were on Sesame Street. I was like what, are you trying to show me up? We laughed at that. Troy is a good guy.

Tell me a bit about how your Polynesian background impacts the way you approached the game? The Steelers seem to like bringing in you guys.

Pete Carroll said it best – he wanted to recruit Polynesian kids when he was a college coach – he told my mother that. My mother asked him why, and he told her it was because Polynesian kids were taught at a young age to be respectful and listen. You only had to tell us once. We are respectful. We listen. I think that was a kind of Pittsburgh thing too – maybe that’s why they like bringing in Polynesian players.

As a Mormon, you also went on a two-year mission – how did you faith affect your approach to the game as well?

I went on the mission for two years. I did nothing for football. It was my heart and soul – I did it for the Big Man Upstairs. I wasn’t doing it for payback. I just knew he’d look out for me.

When I was in the league, I had [Chris Hoke] by my side and he helped me. My faith though helped me with peer pressure. It strengthened my marriage, too. You know what can go down with some of the guys in the NFL. My faith helped me to be clear in front of my teammates that I wasn’t about that life. I always hoped that would get back to my wife and she’d be proud of that. And it taught me to be my brother’s keeper.

But it also screwed me because of that! I worked closely with McCullers. I would always go full speed. But he struggled with the playbook. So I’d give him signals sometimes letting him know where I was going to go when we faced one another in practice to help him out. I always went full speed.

But one time Coach Mitchell heard me and he lost it. He tore me a new one. If he had a shotgun he would have blown my head off! Dan really struggled with the playbook. Some guys would have let him struggle but I helped him. Another time in practice I would remind him to remember his roles. Coach Mitchell thought I was helping him again – I think I lost his trust then. Man, he needs a hug!

Once in practice when he was in a bad mood I asked him if he needed a hug – everyone laughed then!

There was a time when you were done with the NFL. What brought you back?

When I started working with the kids at BYU as a coach there I fell in love with it. I loved working with them. I never worked out though while I was doing that. Then I got a call from Kansas City asking me to come back, but I told them I was done. They called me three times but I kept saying no. Then finally Andy Reid called me and told me to “Get on that plane!” So I went.

At my physical someone said I was just going in to be a practice dummy. The prior year I was, yes. But Andy Reid helped feed my family by giving me that chance. So I told the people – I know this was in the media – that coming back to help him was the least I could do in return. I worked my tail off. Then I saw two guys working out for the team and I told [general manager] Chris Ballard at KC that if they lined me up against both of those guys I’d kick their ass – the winner would keep the job! He just told me that’s not how it’s done – they make the decisions. I knew it – it’s a business. I manned up to it and gave him a hug. I met with Andy afterwards and we talked for a while.

I have no ill will towards the program. I loved the organization. It taught me a lot. After that I knew I was done.

So – any advice now as a coach for kids entering the game today?

As a coach I tell kids now – believe in your preparation. Study the playbook and control the things you can control. There’s nothing more frustrating as a coach watching a guy not control what he can control. Mitchell hated it when you can’t even line up right and now I understand. So, believe in your preparation – it slows the game down. You play faster.