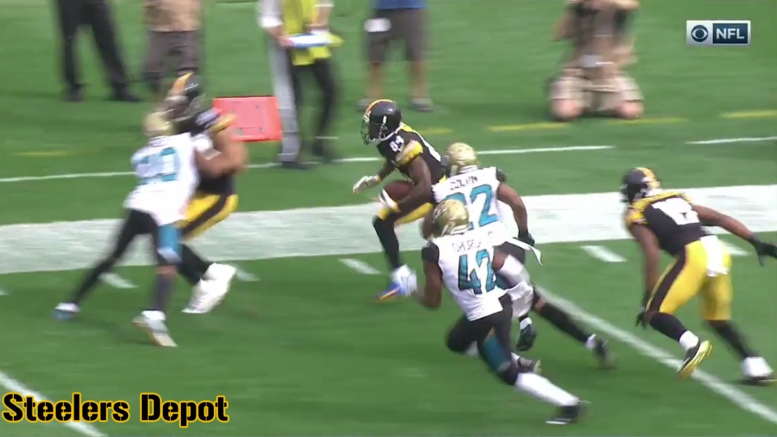 The screen pass is something that often gets unfairly maligned. The argument could be made that the Pittsburgh Steelers at times rely upon it too much, but as the game has evolved, it has largely become an extension of the running game.

Truth be told, some of the Steelers’ best plays on offense actually came courtesy of the screen game. It wasn’t much, but it was on a day in which the offense really didn’t have all that much to offer as a whole, so it certainly is not to be dismissed.

The first successful screen pass came late in the first quarter with the Steelers facing a second and seven from their own 33-yard line. Using 11 personnel, they split out five wide with Le’Veon Bell flanked out wide left, and Jesse James and JuJu Smith-Schuster tucked inside of him on the open side of the field.

Off the snap, the two inside receivers bent to the perimeter, the ball getting to Bell quickly. With the first two defenders manned, the back was able to drag the chase defender ahead for four yards, setting up a third and short—which was converted on a nine-yard screen pass to Bell up the middle.

Late in the first half, with the Steelers facing a third and 10 backed up at their own five-yard line, they ran a screen to Antonio Brown with James and Smith-Schuster as the lead blockers. You will find that Smith-Schuster is going to be in this role a lot as a quasi-tight end. The pair carried out their assignments in aiding Brown, picking up the needed yardage.

Early in the second half, it was Martavis Bryant to the open side of the field, and—again—James and Smith-Schuster tucked inside. Bryant, up at the line, dropped back just a couple of yards to field the ball while his blocks were set up, helping free him for nine yards on first and 10.

Late in the third, the Steelers executed yet another successful screen pass to Brown, this time with James tucked up next to the offensive line, and Smith-Schuster, naturally, in the slot, with the recipient of the pass lined out wide.

Off the snap, James came off the line, with Smith-Schuster releasing his block once the tight end was able to take it over, moving further afield to pick up another defender. The play gained six yards on second and eight.

When a screen pass is executed successfully—and, ideally, with less predictability—it can certainly be an asset within an offensive repertoire. The Steelers don’t always carry it out as effectively as they should be able to, but Sunday’s showing was a positive one.