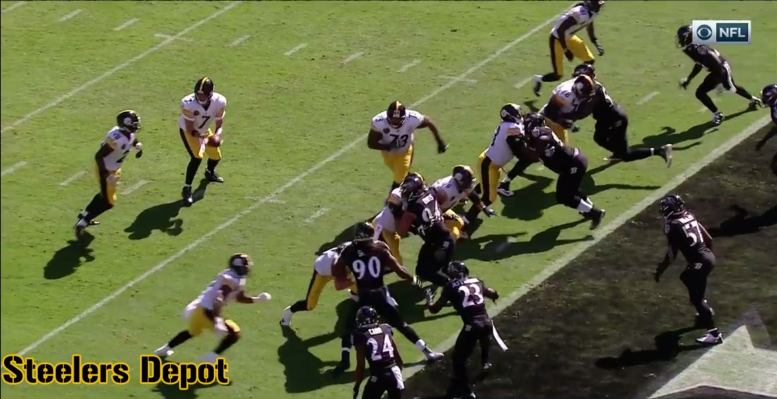 This is not something that I have yet mentioned in an article this year, but you may have seen me mention it on Twitter at one point. The Pittsburgh Steelers have been getting a lot of use over the course of the first four games of the season out of left guard Ramon Foster on the move.

In fact, prior to Sunday’s game against the Ravens, Foster was being used more frequently as a pull blocker than was David DeCastro. Foster still pulled six times on Sunday, but DeCastro did so nearly three times as often.

Perhaps the one knock that has always been rested upon the 31-year-old’s shoulders has been that he is the ‘unathletic’ one along the offensive line. While compared to his teammates, certainly, he is clearly the least athletic of the starting linemen, but it would be inaccurate to pigeonhole him as exclusively a booth player.

Still, he did have a bit of mixed success against the Ravens being used on the move. His first pull came on a variation of one of the Steelers’ true staple counter runs. Typically, with DeCastro, they run this to the left side, but with Foster and Vance McDonald pulling here left to right, Le’Veon Bell was able to find an alley for a nine-yard gain.

Later in the quarter, as the Steelers were in the red zone, they turned to the ground game, and to Foster pulling, to convert on third and two to set up first and goal. With Jesse James and JuJu Smith-Schuster holding down the right side, Foster led Bell around right tackle for a six-yard gain from the seven.

And it was so nice, they did it twice, going right back to the play at the one-yard line. Here, however, I believe his assignment was more window dressing than anything, as Bell just plowed up the middle for the score and certainly offered little appearance of following the block.

Later, in the third quarter, the Steelers initially looked like they were going to be able to open another nice hole for a big gain using Foster and McDonald on the counter, and Roosevelt Nix following along, but they ran into something of a traffic jam, which allowed the inside linebackers to chase down the run to the right, limiting it to just a yard.

While this is the first year that I have actively attempted to track pulling blocks, it does seem to me through the first four games that it is something they are doing more frequently, with more linemen, than they have in the past, and Foster is just one part of that.