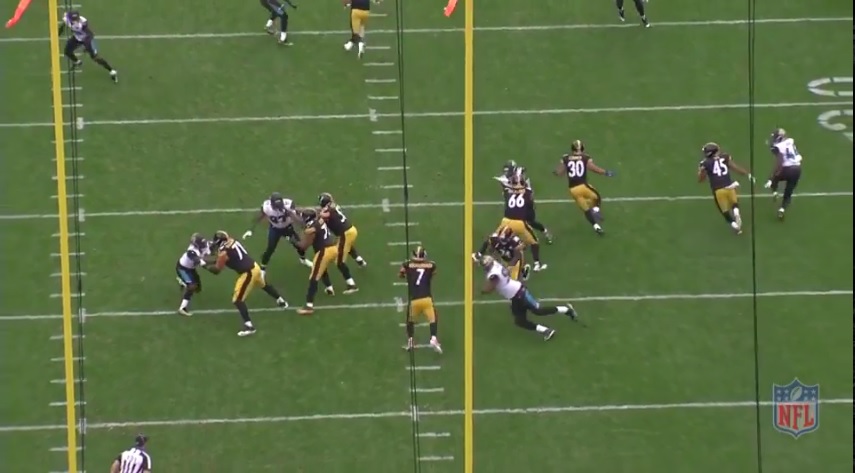 Playaction is something the Pittsburgh Steelers have done little of this season. Heading into the Jaguars’ game, Ben Roethlisberger had used it the second-fewest of any quarterback in the league.

It seems like the Steelers tried to change that approach into Sunday. And the chances were there. But pressure wrecked two opportunities Sunday afternoon. Quick film room, let’s take a look.

The first comes out of 21 personnel. To the bottom of the screen, JuJu Smith-Schuster runs a really nice double-move to burn Jalen Ramsey. Creates separation as he gets vertical and there’s a chance for a big play. But Chris Hubbard gives up pressure on the edge, doesn’t get a chip from the FB or RB, and Roethlisberger is feeling the heat as soon as he hits the top of his drop.

He has to climb the pocket and eventually, I don’t show it in the clip, scrambles out of bounds for a one yard gain.

Good concept. Receiver did his job. Pressure didn’t allow for the payoff.

Second example is probably one you remember better. This isn’t playaction but it’s run out of a heavy, run-formation (22 personnel) on 2nd and 2. It’s still fair to take issue with the playcall but Roethlisberger’s first INT came off pressure. James Conner is late to identify the LB and can’t get square to him. Tries to hit him with a shoulder but it doesn’t do much and the linebacker gets A gap pressure.

Ball comes out sooner than what Roethlisberger wants, throw is behind, and Ramsey makes a terrific play to pick it off.

That’s rush and coverage going together. Rush creating pressure. In the first clip, it masked a CB getting burned deep. In the second, it allowed the CB to make a play.

It should’ve been two big plays for the Steelers’ offense. Instead, one was a dud and the other a turnover.