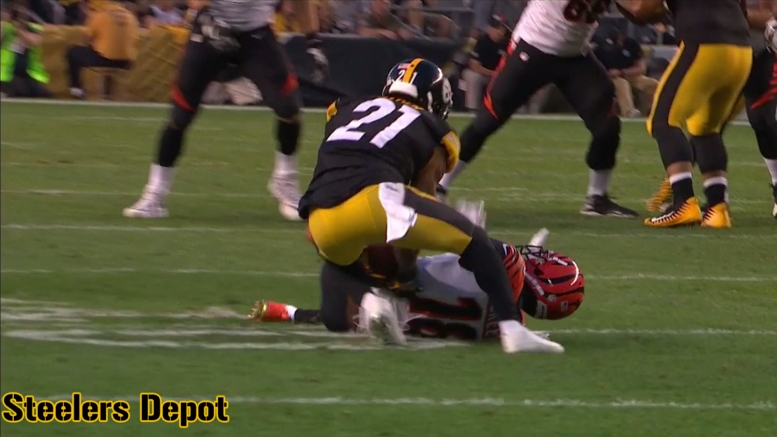 I don’t think I was the only one who had mixed feelings about the Pittsburgh Steelers signing cornerback Joe Haden a couple of months ago. Coming off of years of injuries, and mixed reports about the current state of his health and play, it was hard to know just what they were getting for their $10 million.

As we approach the midpoint of the season, however, it seems to be an investment that is paying off, and he has gotten better and better as the season has worn on and he has adjusted more to his new team, new scheme, new city, and just a new phase of his life.

The Steelers’ new left outside cornerback did not allow much against the Bengals, typified by this early four-yard flat route on second and nine given up to Brandon LaFell, though Cincinnati was able to convert on the subsequent third down and five. But a four-yard reception on second and nine? You generally take that.

Early in the second quarter, Dalton looked in LaFell’s direction again on a go route on second and eight. The throw was influenced by Cameron Heyward’s hit, providing pressure up the middle, but Haden stuck with the receiver all the way down the field with solid coverage.

Of course, the highlight of the day for him was his opportunity late in the third quarter to claim his first interception for the Steelers, which was also the 20th interception of his career. I don’t even know who was the last Steelers corner with that many…Rod Woodson? Of course, this one came off an errant pass and a deflection.

On the Bengals’ next drive after that, Dalton targeted Cody Core deep down the field. Haden did a great job of using the sideline as a second defender, pinning the second-year wide receiver to the outside hash marks and giving him no chance to bring the ball in within bounds.

I don’t know if Dalton would have looked his way on this fourth-quarter play, but Haden had tight coverage here on LaFell. That helped rub Vince Williams from making a quick run at the play, though, yet it was still just for six yards on second and nine.

Haden hasn’t done anything particularly spectacular since his arrival to Pittsburgh, but he hasn’t had to, either, and that’s part of what he loves being here. The Steelers don’t need him to be a superstar. They just need him to do his job, and he is.