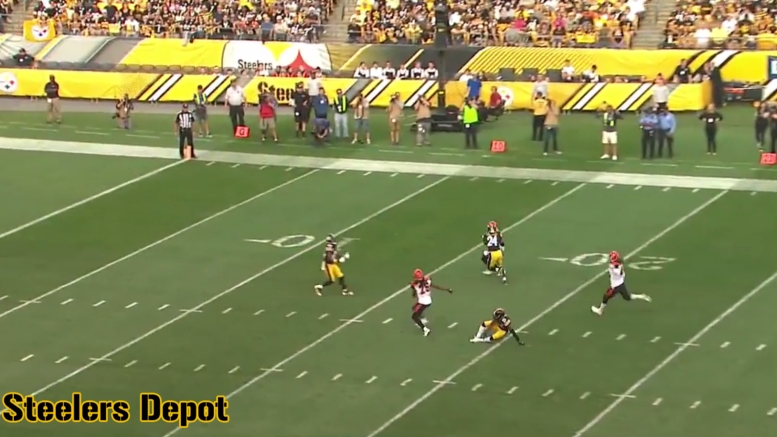 Are you ready for some special teams goodness? Because I have for you today a double feature of two film studies focusing on that aspect of the game, beginning with a player that we basically have not talked about all season: cornerback Coty Sensabaugh.

The Pittsburgh Steelers acquired the veteran in free agency for depth purposes, and chances are it would take a lot for him to see the field on defense, but he has been a mainstay on special teams and serves on the punt return unit as a jammer and the kick coverage unit.

The sixth-year veteran has recorded three tackles on special teams, but given the frequency with which kickoffs end in touchbacks, his primary function is as a jammer, which is, in my opinion, one of the more difficult assignments in football. But let’s start digging in.

On an early punt in the first quarter, Sensabaugh, as he has most of the season, joined Artie Burns at jammer, to the left of the formation. The gunner broke hard to the middle of the field, and he initially did a good job of staying in front, even getting in a punch, but wasn’t in position once he worked back outside. Antonio Brown ended up letting this once bounce, downed at the 10.

Midway through the game, he had a tougher go of it. Off a subtle hesitation at the line, the gunner was able to beat Sensabaugh outside, and once he did that, he had the advantage. He got ahead and forced Brown to signal for a fair catch.

On the first punt of the second half, we see a similar result, Sensabaugh losing to the outside and allowing a fair catch. These were both on punts of 50-plus yards. Honestly, it happens. Like I said, it’s a very tough assignment, and unforgiving.

But that doesn’t stop it from happening, nor excuse it, as he lost yet another rep, on another punt that Brown let down. With the bounce this one ended up being a 55-yard net.

No shock that on the next punt, the Steelers stuck another jammer to his side of the field, getting Darrius Heyward-Bey to help out. This time Sensabaugh got a great initial jam but had to release once the gunner went out of bounds, and the two of them slowed him down once he re-established himself.

That was the one punt that ended up being returned all game. Which is normally not a huge problem. But these were 50-yarders. You normally hope to see at least a couple of punts kicked that deep returnable. But it doesn’t help when you have a valuable returner back there being extremely cautious.