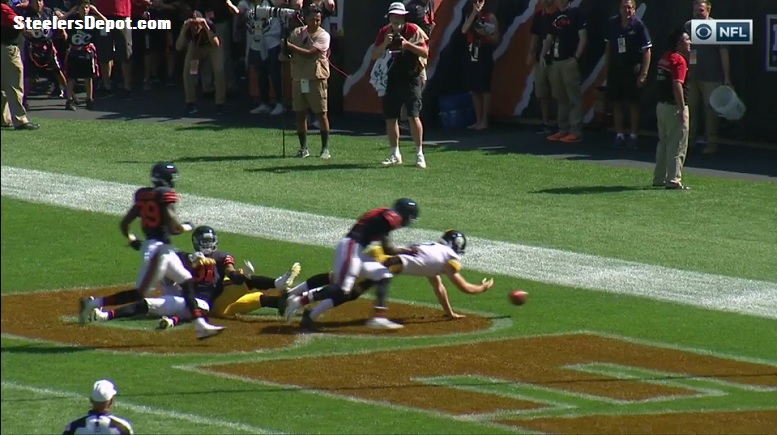 In a game full of big plays and turnovers, it was the last few seconds of the first half that stole the headlines in this week’s Pittsburgh Steelers loss to the Chicago Bears.

In a highlight that you will surely see plenty of times over the next week, Bears cornerback Sherrick McManis sped past Steelers tight end Xavier Grimble on the left side of the line and blocked a Chris Boswell field goal attempt with 6-seconds left in the first half. In a perfect scenario of events (for the Bears), the ball bounced right into the arms of cornerback Marcus Cooper. With nothing but grass in front of him, Cooper was thinking touchdown all the way.

Luckily for the Steelers, Cooper decided to act on that a bit early and in paying homage to former Dallas Cowboys offensive lineman Leon Lett, Cooper slowed up just before crossing the goal-line which started a very odd sequence of events. As a television viewer of the game, you could see new Steelers tight end Vance McDonald and punter/holder Jordan Berry chasing not too far behind Cooper, showing tremendous effort to not give up on the play.

McDonald was able to swat the ball out of Cooper’s hands at the one-yard-line which caused both players to fall and remove themselves from the rest of the play. Much to Berry’s credit, his great effort in chasing the play down from behind put him in position to make a play on the loose football. Due to the speed of the game, I am almost 100% sure that Berry did not have the time to make an informed decision as to what to do.  He quickly dove and punched the ball out of the back of the end zone, which led to an untimed down for the Bears at the Steelers one-yard-line and later the 6-yard line after Bears false start. Ultimately, when everything was settled, the Bears kicked a field goal and were rewarded three points as the first half expired.

This is where the play gets tricky. It is hard to blame Berry for this decision as he had no way of knowing how the game would eventually turn out and that his actions would ultimately cost the Steelers three points in a game that eventually went to overtime. Also, it is fair to say that Berry’s main goal was to make sure that the Bears did not score a touchdown by falling on the football.  His actions obviously support that argument and once again, it is hard to argue against his thinking. Football is a game of inches and a lot of games are decided by just a few points.  If the Steelers end up winning the game by four points or less, the narrative completely changes and we are talking about how Berry’s decision helped win the game.

In a game where the Steelers rush defense got exploited greatly and the offense couldn’t convert late turnovers into points, there are far larger reasons for the loss other than Berry.  Even when just examining this play, it seems the snap, hold, and Boswell’s motion went on without a hitch. Grimble was simply not able to secure the left edge to protect against the rush.  I have watched this play over 20 times already and still cannot put my finger on to the exact reason why.  Grimble most definitely did get off the ball a lot slower than you would like.  Also, it looks as if he may have gotten pulled inside by his right arm from someone in the scrum.  This is something that I will examine more as better camera angles and the all 22 become available.

The Steelers fall to the Bears 23-17 in overtime will hopefully go down as a much-needed wake-up call.  Week 4 will showcase a tough division matchup against the Baltimore Ravens on the road.  With both teams coming off a disappointing loss, this Week 4 matchup should be a very interesting one.