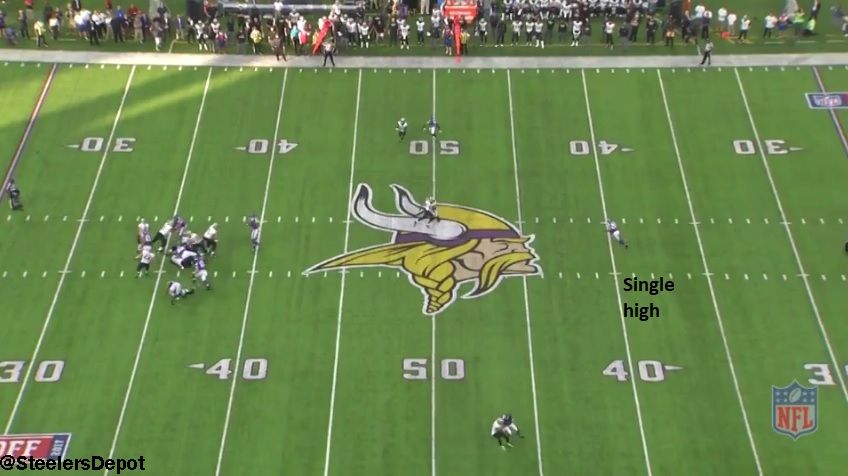 Looking at the Minnesota Vikings’ defense.

It’s the expected strength of the defense. The front four is really good. Like any good 4-3 defense, they have multiple pass rushers that can rotate and stay fresh. Everson Griffen, Danielle Hunter, and Brian Robison. Those three combined for 27.5 sacks last season, just under ten fewer than the Steelers had as an entire defense. Griffen will probably start at LDE but can play either side.

In the middle sits big #98, Linval Joseph. Think of him as a healthy Danny Shelton and Shelton gave Maurkice Pouncey trouble last week (and throughout his career). 1 tech who is tough to move. Tom Johnson will play the 3T with #93 Shamar Stephen rotating in.

Ben Gedeon, Eric Kendricks will start at LB. Anthony Barr seems unlikely to play at this point. If he doesn’t, expect #59 Emmanuel Lamur (former Bengal) to get the nod. Gedeon came off in sub-package though with Barr hurt, I’m not entirely sure how the Vikings will approach things.

Keeping their pass rushers on the field, the Vikings always stay in a 4-2-5 look in nickel.

Projected starters. Xavier Rhodes, one of the top corners in the league, will likely shadow Antonio Brown. Trae Wayne is opposite and the guy I’d pick on. Another ex-Bengal, Terrance Newman is the nickel corner. Good safety group with Harrison Smith and the underrated – to me, at least – Andrew Sendejo.

Get a little less 2 Man with Mike Zimmer in Minnesota than I remember him doing with the Bengals. More single high looks, unless it’s an “and long” situation. Looks like more of a quarters defense when they go zone. Or cover one, as shown below.

Like a lot of 4-3 teams, they’re not blitz heavy. Zimmer seems a bit more conserative than his Bengals’ days too. Used to bluff the A gaps a ton – don’t see it as much now. Secondary isn’t often involved in their pressure packages, though I did watch Smith come off the edge once on third down.

Most “advanced” thing they do on a consistent basis are T/E stunts. Ends have the athleticism and ability to get skinny to work inside.

Well here we are getting ready for week two and it’s another aggressive defense the Steelers will be facing. Minnesota’s head coach Mike Zimmer has been a defensive mind for over three decades, and he’s also no stranger to the Pittsburgh Steelers as he was Cincinnati’s defensive coordinator from 2009-2013. And now he has perhaps the best group of athletes at his disposal.

In Minnesota’s base 4-3, it’s all about the defensive line. This unit is often often tasked with creating enough pressure as a four-man rush and they can deliver. Basically, they need to get to the quarterback quickly, and they do. We can’t discuss this defensive line without mentioning nose tackle Linval Joseph. Joseph usually lines up in a 0 or 1-technique (heads up on the center, or lined up on inside shoulder).  Maurkice Pouncey and David DeCastro will have their work cut out for them this Sunday. What makes Joseph so difficult to block is his quickness off the ball combined with sheer power (he oftentimes doesn’t need to rely on body leverage).

Take this play for instance. It’s a four-man rush with Joseph isolated on the center. New Orleans goes with an inside run through the “A’ gap, but look at where Joseph is right after the handoff. The center is pushed back three yards, and Joseph is there for the easy tackle. Pouncey and company are going to need to key in on him every down. It’s going to be hard to run the ball if he’s isolated in these situations. 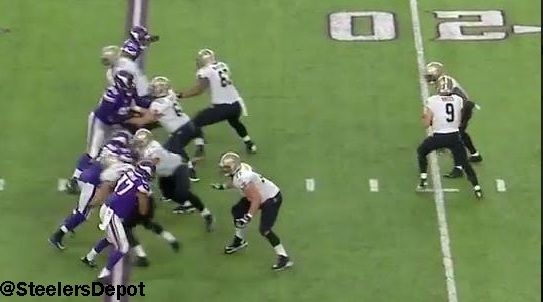 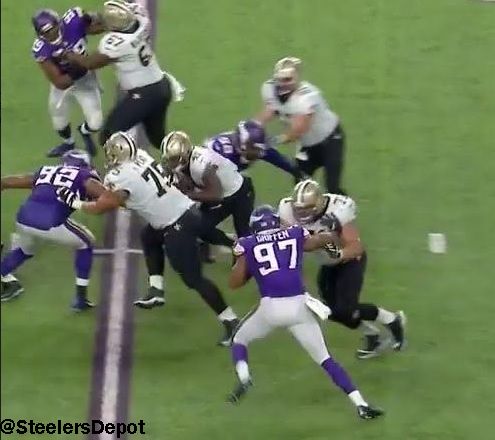 Another force along the line is RDE Everson Griffen. He is the pass rusher of the group and a great one at that. His sack totals dropped off last season, but he still managed 8 in 2016. Griffen has the ability to bull rush, but his finesse moves are where he makes his money.

In the play below, you can see how powerful he is with his spin. Griffen attacks using outside leverage on the left tackle, and then uses his inside hand leveraging the right tackle as he spins inside. The LT is left facing his quarterback, and Griffen has a clean lane for the sure sack. Alejandro Villanueva is a big left tackle and may not be as easily turned around, but the foot work needs to be there against a pro-bowl defensive end that brings a mix of speed and power to the table. 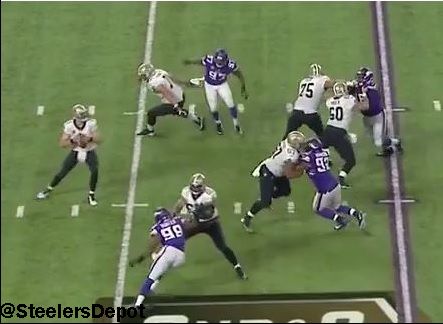 The line is rounded out by defensive tackle Tom Johnson, and LDE Danielle Hunter. Johnson can still plug up the middle, but his pass rushing ability has dropped off over the past season and a half. Hunter is a third-year pro who is a sure tackler that has the ability to make plays all over the field, but is inconsistent at times. He’s coming off of a 12.5 sack campaign in 2016.

This young group of linebackers has the potential to be one of the best linebacking corps in the league. They’re led by mike linebacker Eric Kendricks. Rookie Ben Gedeon is the will, and Anthony Barr is the sam.

Kendricks can make plays from sideline to sideline, is a workhorse, and plays well in coverage (he had 9 pass deflections in 2016). But don’t let him fool you, Kendricks can rush the passer as well, and a lot of it comes from his speed.

In this play, the Vikings dial up a five-man rush on the strong side. Johnson blitzes the inside gap, which fools the center just enough to free up Kendricks in the opposite “A” gap. His speed allows him to fire through nearly untouched with running back Mark Ingram being the only man to beat. That’s not a good recipe for the Saints, as Kendricks easily takes him on and is there for the assisted sack. It’s all about pressure with these Vikings, and with capable pass rushers in the second level, they’re options open up. 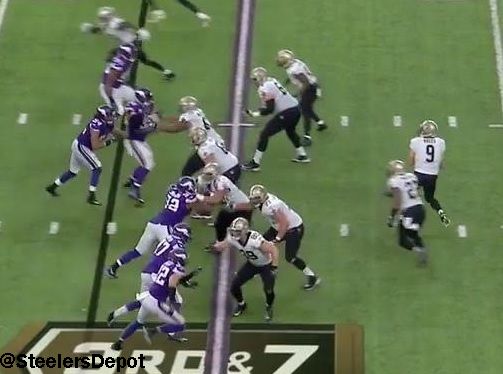 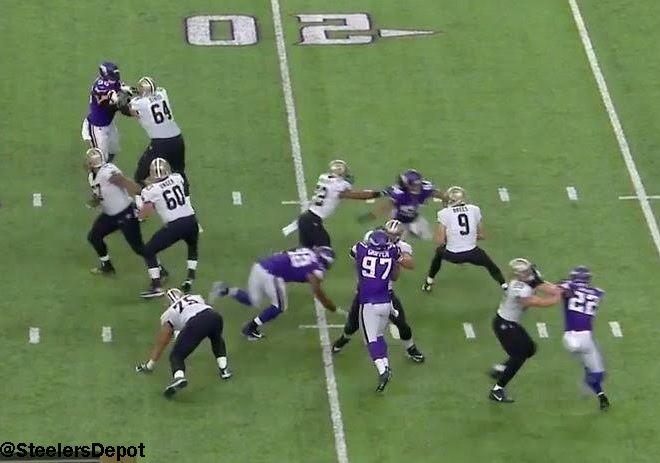 But the problems they cause along the interior, can also come back to bite them. I mentioned briefly the youth of this group, and they’ve got the rookie out of Michigan, Gedeon, obviously being the youngest. He’s great at getting off of blocks and making plays in the backfield, but he can be exploited in coverage.

Below, you’ll see Gedeon bite slightly on the play action fake, and by the time he turns his hips, Coby Fleener has a step on him and makes the catch down the seam. Don’t be surprised if the Steelers look to create these mismatches early on.

This unit sent two players (Smith and Rhodes) to the pro bowl in 2016. Obviously, Smith is usually the first one discussed when talking about this secondary, and it’s largely due to his ability to not only make plays along the line of scrimmage, but also to make up ground in a short amount of time. He’s a jack of all trades type of safety. He’s not the greatest cover safety in the league, and he’s also not the greatest run-stopper either, but he’s pretty darn good at both.

This play below really impressed me during last week’s game against the Saints. Smith approaches the line of scrimmage while the tight end motions. The Vikings are showing man, but once the ball is snapped it’s clear they are in zone. Once he sees the play developing, Smith retreats and makes a great play knocking the ball loose on the crossing pattern.

When talking about the defense in general the word physicality comes to mind, and it’s no different when talking about this secondary. Rhodes, and Waynes especially, are more than willing to get involved in stopping the run. They make plays behind the line of scrimmage, and are proficient in blowing up wide receiver screens. We know the Steelers like to run their screens to Martavis Bryant and AB, but this matchup doesn’t bode well for those options. Rhodes is coming off of a 5-interception season and doesn’t appear to be slowing down.

Sendejo is a formidable option across from Smith, as he is also used in the box and around the line of scrimmage. And you can’t sleep on him either, as he nabbed two interceptions and had two fumble recoveries last season.

The Minnesota Vikings contain a group full of playmakers who are sure tacklers and can pressure the quarterback. This is a huge test for the Steelers offensive line, but they’re also one of the best in the league, so if there’s a group that can contain this defensive front, why not Pittsburgh?