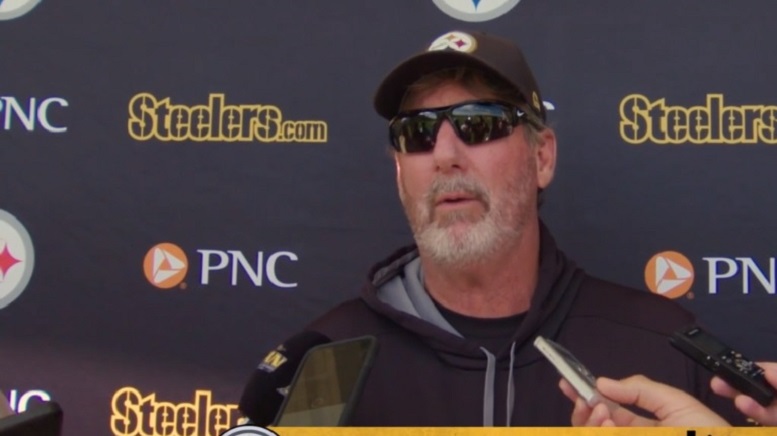 As you can probably imagine, Pittsburgh Steelers defensive coordinator Keith Butler isn’t happy with the way his unit played in Sunday’s road loss to the Chicago Bears. While the Steelers defense did play well against the Bears passing attack, it was the opposite when it came to that unit attempting to stop Chicago’s running attack and especially when it came to the outside zone stretch play. On Thursday, Butler held his weekly press conference and he wasn’t shy about saying how pissed off he was about what happened at Soldier Field on Sunday.

“Of course, I am,” Butler said when asked if he’s pissed off with what he saw out of his defense on Sunday. “It wasn’t a game that we couldn’t have won. We had so many chances to win that freaking football game and didn’t win. So, I’m pissed about that, I’m pissed off about fundamentally we weren’t sound in what we were doing. I think we’re all working towards getting back to where we were before, where we were all fundamentally sound in terms of making tackles and getting off blocks and stuff like that.”

One glaring issue the Steelers defense had against the Bears was missed tackles and they had more than their fair share of them. Butler was asked Thursday if it seems like those missed tackles come in bunches when they happen.

“I don’t know but they did,” Butler said. “The thing that we always have to do, we’ve kind of always done this, is that we have to take time out to work on it. Try to become better as the week comes along. Sometimes it’s the running backs that you’re playing against, sometimes you take bad angles, depending on what you’re looking at and we did a little bit of both.”

As previously mentioned, the Steelers defense had quite a few issues against the Bears offense when they ran their outside zone stretch plays and with the Baltimore Ravens up next on Sunday, Butler expects their offense try to run some of those same kind of plays.

“They run stretch play outside, they cut it back,” Butler said. “They do a lot of the same things that the Bears are doing so there’s not much difference there. They have good running backs and you know they’re going to try and run the football on us. They’re going to try and protect their quarterback. Try to make it a short game and beat us over there and play good defense. That’s their recipe for trying to beat us and our recipe is to try and beat them with the same thing. We have to stop the run, get them in passing situations, get pressure on the quarterback. Try to create turnovers or create sacks and win the football game. It’s going to be a tight game. It always is.”

While the Ravens are almost assuredly going to try to run the outside zone Sunday at M&T Bank Stadium against the Steelers defense, Butler said Thursday he’s making corrections in hopes of being able to shut those runs down this weekend.