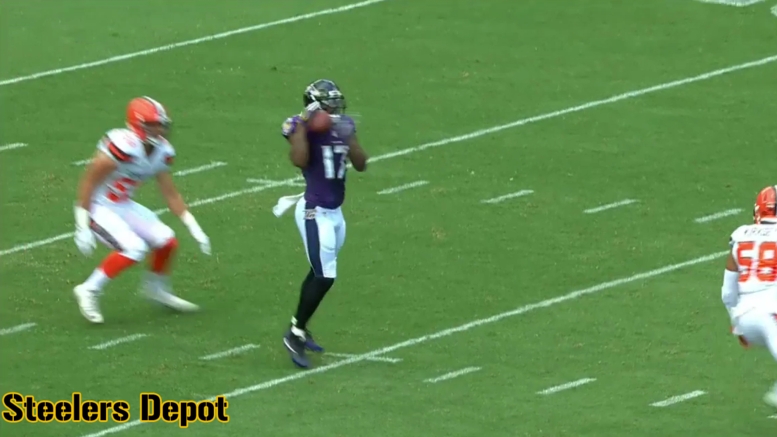 While the Baltimore Ravens are off to a relatively hot start, winners of their first two games, not all is well in the land of crab cakes, particularly on the offensive side of the ball. As if losing their best player, guard Marshal Yanda were not bad enough, now perhaps they may have to contend with the latent diva traits of wide receiver Mike Wallace.

While he hastened to note that he was smiling throughout the exchange, ESPN reporter Jamison Hensley noted during a group interview yesterday that the former Pittsburgh Steelers wide receiver said no fewer than seven times that he “needs the rock”; that is, he is not happy with the number of touches and targets he is seeing.

Through the first two games of the season, Wallace has only been targeted four times in the Ravens’ passing game, catching two passes for a blistering 15 yards. He was targeted just once on Sunday, hauling in his lone target for eight yards. He caught one of three targets for seven yards during the season opener.

“Of course, when you play wide receiver, you’re always tempted to throw your helmet when you don’t get the ball”, Hensley quoted Wallace as having said. “There’s a certain way to go about things. I talked to my coach. We’ll get it done. We’ll make it happen”.

During his first season with the Ravens in 2016, the former Pro Bowler came one reception shy of his career high with 72 receptions, gaining 1017 yards with four touchdowns and averaging over 14 yards per reception. Outside of the touchdowns, those were his best numbers in years.

Wallace had not recorded a 1000-yard season since 2011 before last year, his third season in Pittsburgh. That is also the last time that he averaged at least 14 yards per reception. He has only three times caught at least 70 passes, and never more than 73. But the four touchdowns was the third-lowest total of his first eight seasons.

“It’s early in the season. It’s no reason to overblow things”, he did concede. “But, at the same time, need that rock. I need the rock. We’re going to be patient because we have a good thing going. That’s all that matters”.

He added, “as long you’re winning football games, we all know that’s first and foremost when you play football”. For the Ravens’ sake, they had better hope that they keep winning of Wallace is not going to get the ball, because as he concluded, “never forget — we need the rock. At wide receiver, you always need the rock”.

“I don’t play to block”, he said, something Steelers fans were no doubt aware of. “Our defense is kind of a curse for us right now. They’re so good that it’s killing us on offense. At the same time, don’t forget to give me the rock”.

But hey, he was smiling, right, Keyshawn Johnson?