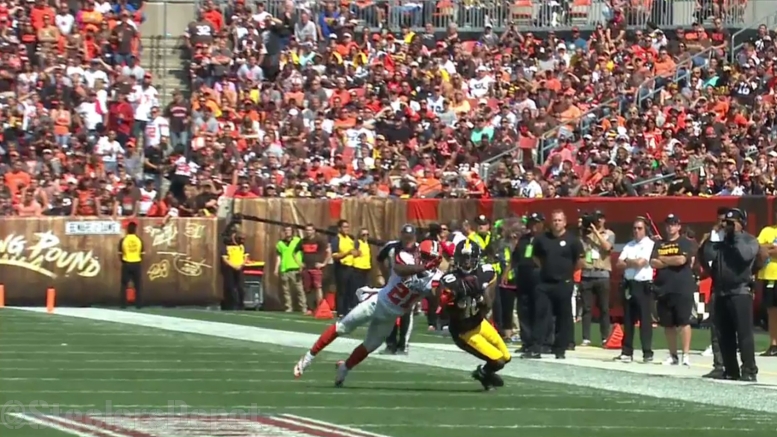 For as highly anticipated as his return may have been, Pittsburgh Steelers third-year wide receiver Martavis Bryant certainly had a pretty quiet first game back on the field in a meaningful setting, limited to just 14 yards on two receptions. It was the first non-exhibition game for him since January 2016.

Despite the fact that he only came up with two receptions, he was officially targeted six times during the game. A seventh target that would have gone down as a third, two-yard reception was negated by a holding penalty, which came on the Steelers’ first drive of the game.

The negated reception was, in fact, his first target of the day, coming on a second and 15 play and looking at a screen pass in the flat with JuJu Smith-Schuster and Vance McDonald the intended lead blockers. The tight end was unable to get over to the first defender in time, and ended up being called for a hold.

The Steelers were then moved into a second and 25 situation because of the penalty, and so, logically, they tried to run the same play, with McDonald and Smith-Schuster blocking in front for Bryant, only on the opposite side of the field. The larger issue this time around? He dropped the ball.

Ben Roethlisberger did go right back to his tall target on the first play of the next drive, running a drag route over the middle, but his pass was too high and the receiver was barely able to even get an outstretched fingertip on it. The tip did result in a deflection that put it in danger of being intercepted, a foreshadowing of things to come.

He finally caught his first official pass in well over a year late in the first half, this again coming on the same screen design, only now with Jesse James and Eli Rogers the assigned blockers. Despite uninspiring blocking efforts, this play was ultimately undone, and held to no gain, because of his hesitance to push the ball upfield.

Early in the third quarter, Roethlisberger attempted his first long ball in Bryant’s direction on third and 18, but the pass was well over the receiver’s head down the left sideline. Until the coaches tape comes out, it’s hard to tell based just on the quarterback’s response if the receiver held up on the route.

As he does routinely, however, Roethlisberger went right back to Bryant on the first play of the next drive, and he finally managed to advance the ball. Working against Jamar Taylor on a comeback route, Bryant did a nice job of reeling in the ball in a narrow window for a 14-yard gain.

His final target saw Bryant running a skinny post out of the slot. Roethlisberger tried to squeeze the ball between the trailing cornerback and the safety coming over the top, but the former was able to tip the ball high and the latter intercepted it. It should be highlighted that the receiver made a legitimate, concerted effort to make the tackle after the turnover, which is perhaps something that may not have always been true in the past.