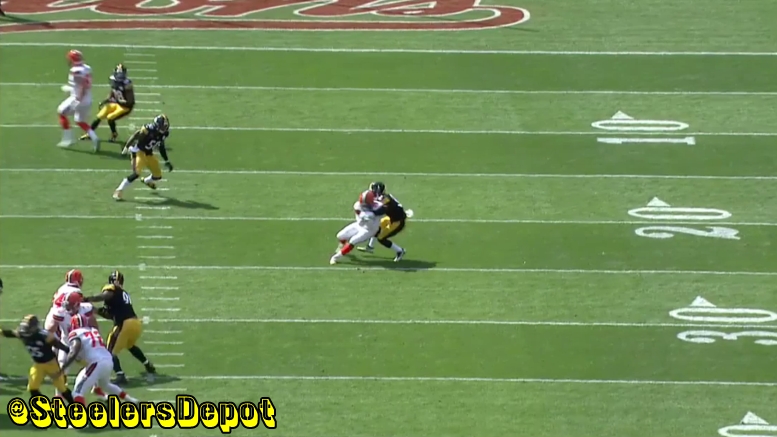 While he did not play every snap in the package, the Pittsburgh Steelers opened the 2017 regular season with first-year cornerback Mike Hilton as their primary slot cornerback, and he had a solid showing for his first taste of real NFL action.

One of the qualities he brings to the table that helped earn him the job was the physicality that he brings to the position despite his diminutive size. So while he did not make the tackle on this one-yard carry in the early portions of the game, you can see the quality run fill.

A couple of plays after that, the Steelers matched Cleveland’s five-wide set with dime personnel, Hilton over the left slot man at the snap. With quality man coverage all across the board on this play, this Steelers blitz with five-man pressure was able to get home for the sack.

During the Browns’ next offensive possession, however, he probably got a little bit lucky working against Duke Johnson in the slot on second and eight, as the apparently former running back was able to get behind Hilton with a double move, selling the corner route for a post, but DeShone Kizer’s pass was high and out of reach. Otherwise, on a better throw, this might have ended in six.

Later in the drive, Johnson did record a reception with Hilton in coverage, but on a fairly non-descript play. Out of a three-man bunch formation on second and nine, Johnson just ran right up to his face and turned to the ball, though Hilton made a fair stab at defending the ball, as seen in the cover photo above.

Finally, much later in the game during the fourth quarter, I did want to show a sense of Hilton’s physicality, and more importantly his willingness to take on the physical aspects of the position.

Here he went after big tight end Seth DeValve in the open field, making solid first contact. It’s easier to see from the end zone view, but it seems the reason he didn’t make the immediate tackle is that he knew he had help, and so took the chance to go after the ball. He was ultimately credited with the solo tackle. This on third and 19, by the way.

He wasn’t tested much, and when he was, he got a free pass, but overall it was a decent start for Mike Hilton as the Steelers’ primary slot cornerback. It will be interesting to see how much performance dictates playing time going forward.