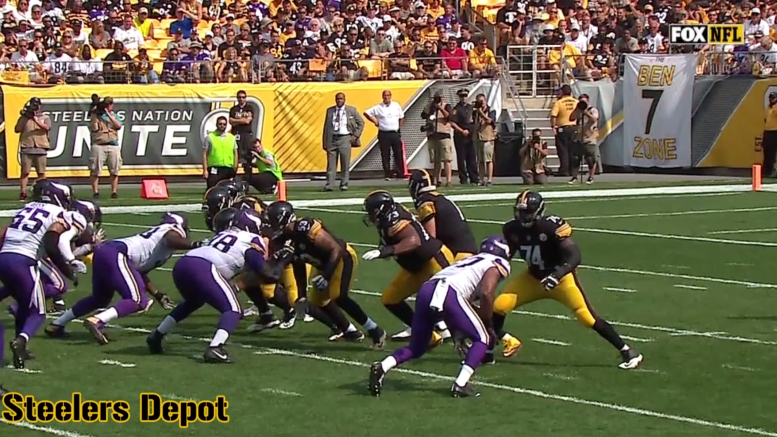 As we wind down the week, there are still a few more things from Sunday that I would like to get to before we head into Sunday’s game. For one thing, I think it would be beneficial to give some type of evaluation to the performance of Chris Hubbard, who may be starting for the Pittsburgh Steelers on Sunday.

Technically, he did start against the Vikings, as he was used as a tackle-eligible on the first play of the game, and five times overall. Set up as the right tight end at the line, he drew the responsibility of playing the left defensive end straight up, and he showed tenacity in staying on the block. This is something we haven’t seen as much from him to date.

Later in the quarter, they put him at the line on the right side outside of Jesse James, once again asked to handle the end on a run off the right side. While he had the advantageous angle, being see so far away from center, he still should be credited with carrying out his assignment here for a successful offensive play.

Now in the third quarter, with Alejandro Villanueva needing to sit out the third quarter due to an illness, Hubbard had to change his focus and step in at left tackle, which is only the second time he has done that in a meaningful game, the previous time coming in a five-play stint in 2015.

Thinkgs didn’t go quite as well, though in fairness he was asked to handle Everson Griffen. The two-time Pro Bowler was able to beat him inside with a nice spin move that forced Ramon Foster to step in and wedge him as the defensive tackle tried to loop around.

He did a bit better on the next drive, initially giving ground to Griffen’s bull rush, but the reserve lineman was able to re-establish his base by backpedaling, preventing himself from getting stood up. There’s no doubt that he had his hands full against Griffen, but he did get better as the matchup went on.

Midway through the fourth quarter, they had to shove Villanueva back out there with Marcus Gilbert going down. Hubbard had a better time there, including nice work in pass protection on his first snap.

They even let him pull from the right tackle position. On second and one, he led Le’Veon Bell around left guard for a three-yard gain.

Even I don’t think this is the best Hubbard has ever looked, but when you have to play at not just one but two different positions off the bench, it’s a little bit different than if you are taking practice reps all week.