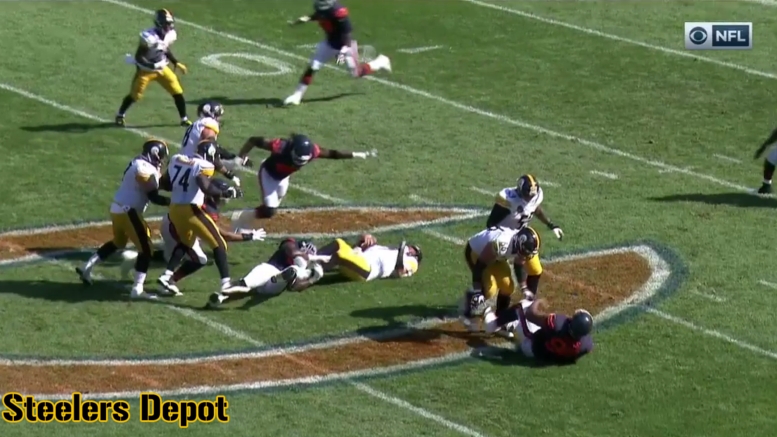 We don’t know yet whether or not Chris Hubbard is going to start against the Ravens, but if he does have to, he needs to play a bit better than he has over the course of the past two games. Marcus Gilbert, though, is a very good lineman regardless of the quality of his backup, so the sooner he gets back, the better.

But given that he might still be in the lineup come Sunday, it would be worth taking a look at how he performed on Sunday. And I’ll start off with the first play of the game, a go route for Martavis Bryant. Hubbard was late throwing his arms out, but he met leverage for leverage and anchored well to keep the pocket clean.

On a slow-developing screen pass to Le’Veon Bell in the middle of the quarter, though, he had some trouble with the same defender, Akiem Hicks, who probably got away with a bit of defensive holding, but pulled off a bull and jerk move to get Hubbard waist-bending and himself around the edge, ultimately hitting Ben Roethlisberger—perhaps a tad late, if Cameron Heyward’s hit was late.

A few plays later on the same drive, the Steelers asked him to pull, in this case through the left-side B Gap, able to drive the linebacker out of the hole, but the crease was so narrow that Bell could only get two yards out of the play.

Late in the first half, we saw the lack of reps between David DeCastro and Hubbard come into play as the two failed to pass off a stunt that forced Roethlisberger out of the pocket. This one was really more on DeCastro.

In the middle of the third quarter, as the offense approached the end zone, Roethlisberger dropped back to pass, but the majority of the offensive line struggled to contain their man, and the quarterback once again had to step up, this time taking off and scrambling for a first down on third and six.

Early in the fourth quarter, the Bears dropped Pernell McPhee into coverage, leaving Jonathan Bullard against Hubbard, handling the end well as DeCastro moved to pick up the linebacker to let Bell release into a route.

But just two plays later, he did get McPhee, and this time the rusher beat him with a rip move, driving around the arc and making an athletic, diving sack that killed the drive on third down at the Bears’ 43. This was a big moment in the game.

He also had a holding penalty in the game. As should probably be expected from a reserve, he had a few ugly moments, but overall he does a solid job, and did so last year as well. He is a replacement-level player, which is exactly what he is expected to be.