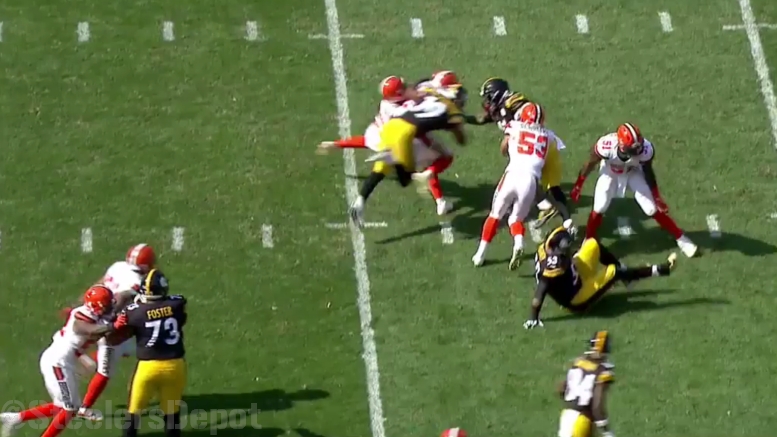 While I was not surprised by the fact that the Pittsburgh Steelers had rookie wide receiver JuJu Smith-Schuster active for his first career game, I was surprised that he did not even see a single target, despite playing not far from half of the team’s offensive snaps in the game.

In fact, while it would require further digging, it likely will not be a debut to remember. His most significant moments in the game, truth be told, were a pair of offensive holding penalties that hurt the offense on both occasions, though he did have two other notable moments.

Let’s stick with the penalties first. That one came quite early—as a matter of fact, it was the very first offensive play of the game for the Steelers—and it wiped out a seven-yard reception to Eli Rogers that would have made it a second and three, but instead set up a first and 18. They may have run five plays on their opening drive, but two were wiped out by penalties, and was ultimately a three-and-out that was kickstarted by the rookie wide receiver’s hold.

His second hold was even more damaging. Coming midway through the fourth quarter with the Steelers looking to preserve an 11-point lead, he was flagged on a first-down run on which Le’Veon Bell picked up 12 yards that would have put the offense on the Browns’ 44-yard line.

Instead, they found themselves back on their own 32-yard line facing a first and 20. Predictably, the drive stalled there—they even lost a yard—and ended up punting. The Browns, starting the ensuing drive from their own 27, scored a touchdown and a two-point conversion to make it a three-point game.

As mentioned though, he did have two other notable moments, the first of which came after Ben Roethlisberger’s interception that ended the Steelers’ drive previous to the second holding penalty. The quarterback looked to stick one down the seam between two defenders, but the near defender tipped it for the far defender to intercept.

It was Smith-Schuster, also running deep on the play, who kicked it into high gear and chased the defender from behind to make the tackle on the safety after he advanced the ball about 30 yards, showing the reckless abandon for his body that comes with youth.

Later, after the Browns’ score, they attempted a pooch kick from the 50-yard line, which the rookie did well to field cleanly. It’s worth pointing out that a recovery by the kicking team on a kickoff would result in an exchange of possession.

The Steelers really struggled to get on the same page throughout the day, so I’m sure they didn’t get to everything they would have liked over the course of the day, but I would imagine Smith-Schuster shouldn’t have to wait too much longer to actually see a pass come his way.